No, not the Formula 1 kind but the flagship event of cycling in the borough, hosted by North Down Cycling Club.

For the second year running, the NDGP, sponsored by Chain Reaction Cycles, has moved to

August in a bid to attract riders, A4 – A1 from across the country, to race when the weather has at least a chance of warmth.  With great prize money on offer, the best riders will be in attendance in a bid to claim the honours of this prestigious race. The route, which in the past has held the NI Road Race Championships, will be run on the usual course.  Rolling out from Race HQ at Donaghadee Community Centre, the race will be neutralised until the Warren Road.  An immediate quick sting in the legs will be dealt by the climb up Orlock, before descending towards Groomsport and turning up Springwell Road, where the KOH awaits.  Left again onto the High Donaghadee Road, when the riders will be flat out, the peleton either stretched or broken up after the climb before turning left again down New Road, Donaghadee.  This course is very deceiving, on paper it appears relatively flat and fast bar the two climbs, but it has the ability to drain the energy from legs, especially once you have climbed Springwell for the ninth time.

The racing will be fast, exciting and unpredictable but also very accessible for spectators, as there a number of great vantage points to watch.  The top of Orlock, Springwell Road and Warren Road to name but a few.  Commencing with the Over 50s race at 1130am, followed by the A4 race and the main race comprised of A1-A3 riders, the cycling should be over by 3.30pm.

North Down Cycling Club sincerely hopes this sporting spectacular does not inconvenience the day to day business of the public, whose support we greatly appreciate, but we would ask that motorists respect the directions of the marshals on the route and slow or pull over as the riders approach, to ensure the safety of all involved.

While all eyes may be on Rio, there were other medals up for grabs at the weekend in 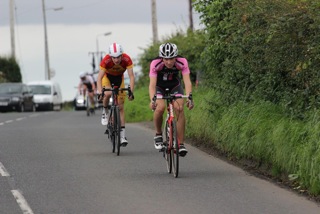 Ballymoney. The Ulster Youth Finals were well attended by NDCCs U12 to U16s in time trials and the road races.  Emulating Laura Trott, young Rachel White took gold in two events, the U12 time trial and road race.  Rachel has been a dominant force in her age group all season and this is her just reward.  U13 Maia Simmons, having recently showed what a great talent she is in Donegal, took bronze in the TT and gold in the road race.  Katie Armstrong, racing in the U16 category took two silver medals, showing her form just before she heads across to the Schools Games later this month.  Whilst the girls brought home the silverware, the two NDCC boys were just outside the medals, with strong man Nathan Keown 4th in the U15 road race and newcomer Patrick Watson, 5th in the U16 road race.  Nathan’s young brother Matthew, who is new to the sport, showed he is a chip off his brother’s block by riding well and finishing strongly in the U14 race.

North Down were also represented at the John Beggs Memorial Race by Adam Leach finishing as 1st A3 and Andrew Chivers 1st A2.

Wednesday night is club night and this week saw the club championship jerseys up for grabs on the Springwell/Orlock/Stockbridge course.  The evening’s races are divided into age categories – Ladies, Senior, over 40 and Over 50.  You would have been forgiven for thinking the weather was mid April rather than August, with a nip in the air and a howling wind but this did not deter a more diminished field than previous years from turning out.  The leg zapping course included two climbs and depending on the category, were raced four or five times.  Marshalled by the Peninsula Tri Club and our own members, NDCC would like to extend their gratitude to all who turned out to help ensure the races passed off safely.

Winners of the jerseys are as follows:

The jerseys will be presented at the Awards Night.

The annual club barbecue is being held at Ballyholme Yacht Club on Saturday 27th August.  Tickets are still available from the club Social Secretary.  To reserve them just drop him an email and keep an eye on the club Facebook page.