The Ards Peninsula was the host destination for this year’s Tour of the North International cycle race. In an effort to revitalize the area, Ards and North Down Borough Council injected funds into the race and attracted teams from all over Ireland, Scotland, England and Holland.  The race was run over four days and incorporated five stages, ranging from a 5mile time trial to a leg sapping 98mile road stage.  There were plenty of local interest; North Down CC entered a strong team, with last year’s winner Dave Watson, Dave Hamilton, Lewis Ferguson, James Ambrose and Willie Larmour.  Andrew Chivers and Keith Phillips were guests of sponsor Powerhouse, with Bikehouse owner Fraser Duncan riding for the elite ASEA.

Kirkistown racetrack was the venue for the opening criterium – a short, fast circuit race – of the Tour.  Renowned for it’s crosswinds, this was not going to an easy one to script and it was not 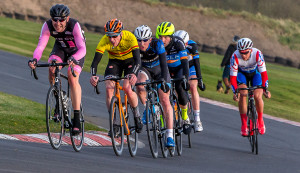 long before the racing started in ernest.  A powerful break managed to pull away and eventually lapped most of the field, creating havoc for the timekeepers.  English rider Ed Clements managed to slip the break and with three laps to go, stayed away for a solo victory.  Dave Watson finished 4th putting him in a great position for the next three days.

With Easter Public Holiday being so early this year, the weather did not fail to disappoint.  High winds and driving rain greeted the riders on Day Two.  Starting and finishing in Portaferry, the course took in Ards where Fraser Duncan 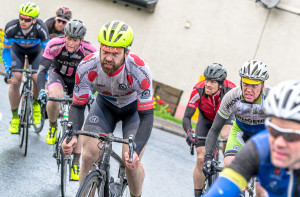 won the first KOH, before crossing to Ballywalter and completing a couple of laps that took in the berg of Windmill Hill in Portaferry.  The wind played havoc with the field, as it whipped across the peninsula with the flat landscape, riders echeloned along the roads with only each other for shelter.  A few breaks were tried but soon reined in, and it was towards the end of the stage that two broke free, sprinting for the line in an almost dead heat.  Dave Watson came in 5th, securing his 4th spot with Hamilton 9th but the teams performance was enough to put them 2nd in the overall classification.  Chivers of Powerhouse was unlucky to puncture twice ending his hopes in the Young Rider contest but with youth on his side, he will be back next year to try again.

The race against the clock was an opportunity for ‘testers’ to gain a few seconds and move up the leader board.  Dave Watson, lying in fourth spot did exactly that.  The tough 8km TT took in the Mountain Road, a course suited to Watson’s strength and a time of 10mins 14 seconds moved him onto the podium and into third place. The rest of the NDCC team rode well, holding onto their 2nd place in the Team GC.
Both Phillips and Chivers of Powerhouse put in good performances on this stage.

The grueling roads up Scrabo and around Ballygowan formed part of the course for Stage Four.  Having ridden an 8km TT in the morning and after the tough stage the day before, tired legs and 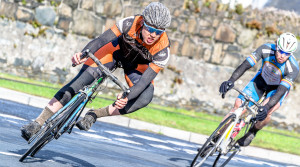 bodies were to face a war of attrition.  Howling winds and driving rain persisted for most of the day, draining the energy and for some, the will to live from the riders.  Breaks occurred but were brought back and it was not until the final KOH on Donaghadee Rd from Ards that Peter Anderson from East Kilbride saw his opportunity and jumped away.  With only 15 miles to go, he put his head down and battled alone, gaining almost two minutes as he turned up Springwell Road, with a chasing group that included Watson hot on his heels.  At the finish on Warren Road, Anderson came in for a well-deserved victory 1m50s ahead of the field.  Dave Watson secured his 3rd spot overall but coming in 10th. Ambrose, Hamilton and Ferguson all finished safely, caked in mud looking like they had just completed Paris-Roubaix,

The weather was at least slightly kinder on Monday for the final stage, even if the route was not. 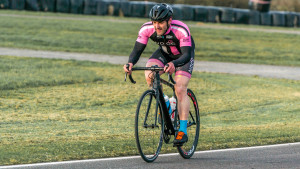 Leaving Bangor RFC, the field sped across to Ards and followed the tight, scenic roads to Whiterocks before completing a couple of laps of the rolling hills around Killinchy/Balloo.  Fraser Duncan, who had been leading the KOH competition did not start, so it was great to see another local rider, Glenn Kinning wear the polka dot jersey.  Today, the bunch mainly stayed together, perhaps in the knowledge that they had to finish on top of the Brae.  The rulebook should have said that this would shatter the bunch, but this was ignored, the bunch turning up for the last climb together.  A large crowd had turned out to spur on the NDCC lads, the tension mounting as riders carefully marked one 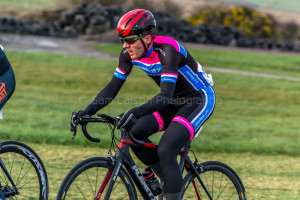 an other.  Watson and Hamilton were well placed towards the front, and as the race crested the Brae, the fast downhill finish produced an epic final, with Watson sprinting to 3rd place on the stage, Hamilton 11th and Ambrose and Ferguson well up the bunch.  This secured Watson his 3rd on GC and NDCC 2nd in the team category.

Phillips finished strongly and should be justly proud of his efforts over the entire race.