As befits the jewel in the Ulster Road Racing crown we sent a strong squad of riders to the Paris – Katesbridge. Three of our finest non club sponsored riders turned up at the Katesbridge Orange Hall for this legendary event on a fine Saturday morning. This event has been won before by North Down and it seemed like it was time to bring the trophy back home again.

Paul Ferguson, Shane Farren and Noel Boyce were the men in question at the A3 event with a new course to sort out the men from the boys. A steep climb into Rathfriland has recently been added to spice up the finish with only the strongest riders having the legs to contest the uphill sprint.

The action started on the second lap with a break getting away. Shane Farren was in the move and they soon had a good advantage over the bunch. Realising that this would be THE break of the day Paul Ferguson soon bridged across to join them. They all worked solidly together opening the gap up to over a minute. The pace was high however with weaker riders soon being shelled out the back whittling the once large group down to eight riders. Two of which were North Down men.

It wasn’t long before the survivors in the break hit the steep ramp up to Rathfriland and Shane Farren looked determined to take the spoils at the top. Unfortunately cramp put an end to his chances leaving Paul as the last North Down rider standing. Paul grasped his opportunity and had it not been for a small group getting off the front he would certainly have been on the podium. As it was he finished a fine 6th place making this his third sixth place in row!

Noel Boyce came home safely in the bunch having had a quiet race due to two men away in the break.

With the Bobby Crilly coming up in a couple of weeks this should set up our riders for a good ride in one of Ireland’s finest one day races, famous for it’s summit finish on top of Divis mountain.

The McConvey cycles XMTB race has a reputation for always being held in glorious weather  in the beautiful surroundings of Lady Dixon Park. The forecasters were suggesting that 2013 would be the first time that rain would affect the race but as ever the organisers made sure that there would be plenty of sunshine making a fantastic day for the many spectators and a typically hot race for riders. 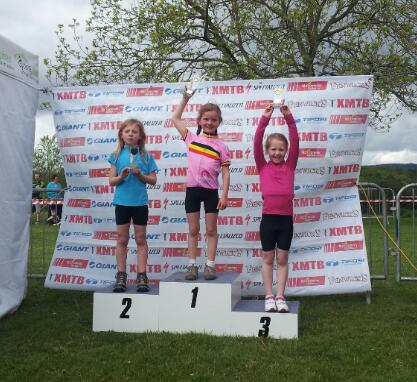 It was looking a lot like a return to the early 90’s with a lot of old faces from years ago lining up to contest the race. With Gary Crawford coming out of retirement, Duane’s “old skool” bike set up (though not as “old skool” as the “new” club bus) and a newly rejuvenated Ross Blayney lining up to contest the S2 race you’d have thought that North Down hadn’t recruited a new rider in 20 years.  Daisy Blayney came to the rescue though bringing the average North Down rider’s age down about 30 years. What a ride from her though on her first race! Third place was her reward for a hard days graft and lovely trophy to take home. It seems like our junior girls are taking over as the club prize winners!

Daddy Ross wasn’t so fortunate however. Mountain biking is hard on bikes as well as rider’s bodies and an unfortunate mechanical on his first lap was to finish his day. Duane McCreadie was also robbed of a good finish breaking a chain within sight of the finish line leaving Mark Farrell as highest North Down finisher in the A3 race.

We’ve a new rider in the elite category for 2013 now with Lewis Ferguson back out of retirement. Battling against the best in Ireland Lewis finished a spectacular 5th on only his second mountain bike race this year. Looking quite splendid in his North Down skinsuit it’s good to see the club represented at the highest level. 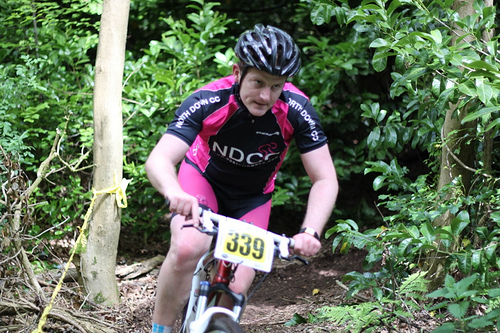 The Alexander brothers both finished well up in the junior boys categories boding well for the future.

A hillclimb is a hard enough event on a pleasant summer’s evening. When there is a headwind all the way from top to bottom and the temperature is below ten degrees then an already hard event becomes a real challenge.

Wednesday night was the first club hillclimb of 2013 and despite the poor weather there was a sizeable turnout. Whilst not the most popular event on the club calendar it more than made up with depth of talent. The juniors and ladies all showed and there were a few tourists who turned up to test themselves against clock and incline. As ever it was Mark Kane who won overall dressed in the new Kaners’s kit which caused minor retinal damage to more than one competitor. Fastest North Down rider was Shane Farren with junior honours being taken by Will Hamilton on a Penny Farthing.

Big thanks to Martin and his team of helpers. It wasn’t the warmest of evenings to stand by the road in a yellow bib though your efforts were very much appreciated

Team Down Chain Reaction Cycles rode a magnificent Ras. Comprising of four North Down Riders – Dave Watson, Stuart Henry, Connor Hanna and Matty Blayney they survived everything that the race could throw at them. All four “Men of the Ras” finished with the fantastic support from their club and  team over the eight days of hard racing. Dave Watson in particular came home with 7th Cat 2 rider and 24th overall in the County Rider classification. A formidable achievement hard won on Ireland’s hardest stage race. 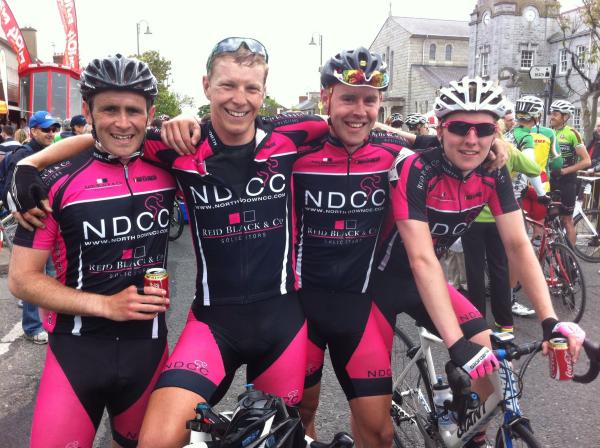 Men of the Ras