You’d be fooled into thinking that David Brailsford, boss of Team Sky, had taken a break from his usual day job and was running the show at the North Down Ladies Team. Week in week out they’re dominating the local races and steamrollering the opposition into submission. Dave’s not in charge however and it’s our own Chairman, Ian Blayney, taking on Director Sportif duties for the strongest ladies team in Irish racing. Ian dreamt up the idea of a ladies team late last year and built up his squad over the winter. Starting with a mix of experienced heads and proven race winners coupled with some ladies new to the sport the fruit of his labours is coming to fruition. 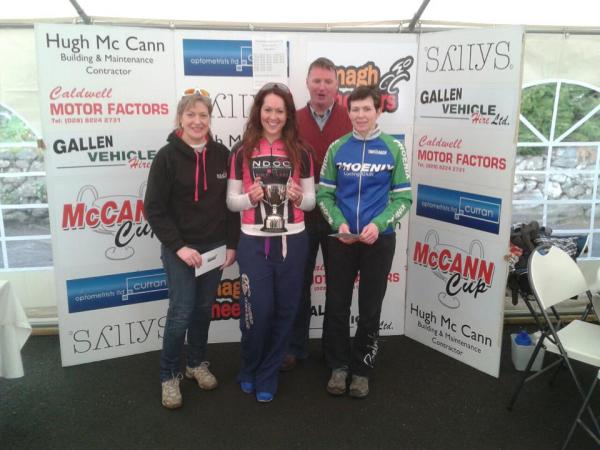 The McCann Cup at Seskinore ,promoted by Omagh Wheelers, was the scene for our latest ladies race on a bitterly cold Sunday. Freezing winds with flurries of snow set the scene for them and as ever it was Janine McNally leading them over the line. Three wins in a row is surely some sort of record and Janine shows no sign of slowing down! Unlike Team Sky however our ladies like to share the podium amongst the “domestics” and Alison McMullan chased Janine right to the line this week. Moving up a step of the podium put Alison in a strong second place. Let’s not forget Louise Tognieri either though finishing top ten after working tirelessly and selflessly for the team throughout the day. Battling at the front into a savage headwind her efforts ensured the latest ladies victory.

You could be forgiven for thinking that it was only the ladies racing this week but the men were in action too. Duane McCreadie and Dave Watson were both racing again after some great riding at the Phoenix GP. These two riders are both enjoying successful comebacks after a spell away. Hard racing was the order of day in their race too with tales of riding into block headwinds on lumpy roads at 18mph and then up to 34mph with the wind behind them. It was a longer race too this week but both our riders finishing strongly again. Our men’s racing team has some ambitious goals this season but with the riding we’ve witnessed so far they should not have much to worry about. There is still a long season’s racing stretching ahead and with the likes of Matty Blayney and Paul Ferguson keeping their powder dry there will certainly be a few more trophies in the North Down cabinet for 2013.

Chain Reaction Cycles have been showing their support for the club again. 10 lucky winners have won a free bike fitting in March. This will be performed by an experienced bike fitter which should fine tune any issues the riders have been having with their position on the bike.You might wonder how the bicycle, a 200-year-old invention that has retained the same basic diamond-shaped design for the last 100 years, still cause humans so much discomfort?

The answer lies in the fit. Whether you’re a touring or racing cyclist, if you don’t fit the bike to the body you’ll end up fitting your body to the bike. You can develop discomfort and compromised performance at the least hence the importance of a correct fitting bike.
Just ask Billy Kirk……