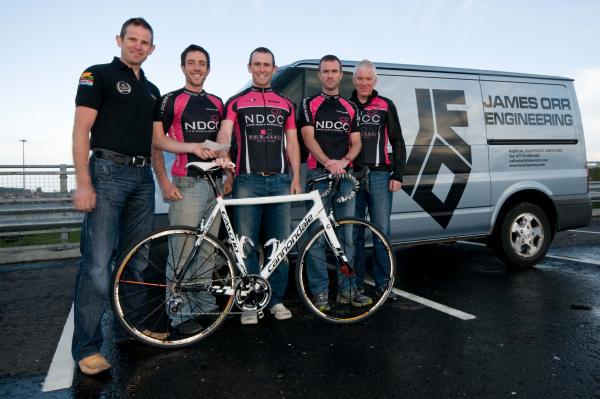 The club held it’s first 10 mile time trial of the season on the new Millisle – Ballywalter course. It proved to be a demanding circuit held in cold conditions with a formidable headwind for the return leg. Fortunately the rain held off for the hardy competitors which made life a little easier for those suffering out on the road.
Kerry Speers was the woman to beat on the night with Alison McMullan coming home in second place. It can be seen from the results sheet however that Molly McLarnon wasn’t too far behind and will surely be threatening the sharp end of the leader board before long.
Great support was provided on the night from our hardy team of helpers. Big thanks to all that braved the cold to ensure that our event was held run both safely and professionally. Good to see Big Swennie out at the turn, hopefully recovered now from his accident earlier in the year.
Next event in the calendar is the Bradshaw’s Brae Hillclimb on the 23rd. You’ve all been over this hill every Saturday since you joined the club so there is no excuse for not showing up for this challenging event. It’s an interesting hillclimb as it has a flatish run-in before the climb which favours the allround rider and makes it harder for “short hill specialists” to gain a major advantage.

What is arguably the best single day classic in the country, the  North Down Grand Prix, which incorporates the Northern Ireland Road Race Championships, takes place this weekend on the roads of North Down.  The race headquarters will be Donagadee Rugby Club and the course will be the Orlock – Springwell circuit.  The well used, safe but demanding course will once again be the venue for a bonanza of cycling for youths, ladies, A4’s, over 50’s and of course the 74 mile senior championship race. 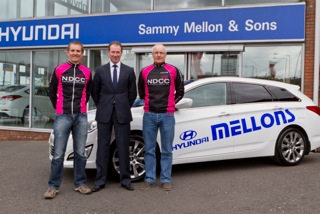 The premier event of the day, the Northern Ireland Championships will cover no fewer than 74 hard miles.   Certainly the comments of Commonwealth medallist Joe Barr after the event last year suggest that it is not only a competitive but a challenging course.  According to Joe: ‘…it was a real All-Ireland Road Race Championship course there wasn’t one mile where you didn’t have to ride hard’.  It is no surprise either that one of the first to enter this year’s race was the redoubtable Joe.  Heading the entry must be, however, last year’s winner Peter Williams, who is riding this year in the colours of Curran Racing.  The 2010 winner, Gary Cranston, is also back and he will again head a strong East Antrim Audi team with Glen Kinning.

Thanks to support from Chain Reaction Cycles, North Down Borough Council, and the Bokhara Restaurant, an extensive prize list is on offer in all the events.
Indeed the promoting North Down CC has even organised free pre – and post race – massages for all competitors.  The racing commences at 10.00 am with the Northern Ireland Youth Championships for Under 14’s and Under 16’s. Also on the course at the same time will be a non-championship race for over 50’s.  There is a unique twist to this race with a handicap being introduced for the first time, to give the ‘club riders’ a better chance.  Although the senior races are full to over-flowing, there still are places available in these races by visiting Entry Central.

The A4 race, ladies and senior championships will commence at 12 noon.  Back to defend her title in the ladies race will be Maryland’s Heather Wilson.  The ladies will race over 3 laps of the High Trees, Groomsport, Springwell circuit, with the finish again at the top of Orlock, a distance of approximately 26 miles.  It’s hard to see anyone wrestling the title away from Heather, who has already defended it twice on this circuit, but Ciara Mulholland did put up a great effort last year.  As with the youth races, there still are places available in the ladies race and entries can be again accessed through Entry Central at:
http://www.entrycentral.com/index.php?festivalID=267&raceID=null

All in all an exciting day’s racing is in prospect.  The question simply remains, who will be awarded the coveted champion’s jersey, which is sponsored by Bioracer?  If the previous two editions of this event are anything to go by, there will be races which are truly worthy of their championship status.