As far as the Ulster Championships are concerned the road race went the same way as The Olympics in that the best racing (and medals!) was reserved for the women’s race. The only medal to be picked up by a North Down member at the Championships this year was from Janine Carson, recent member of the club. 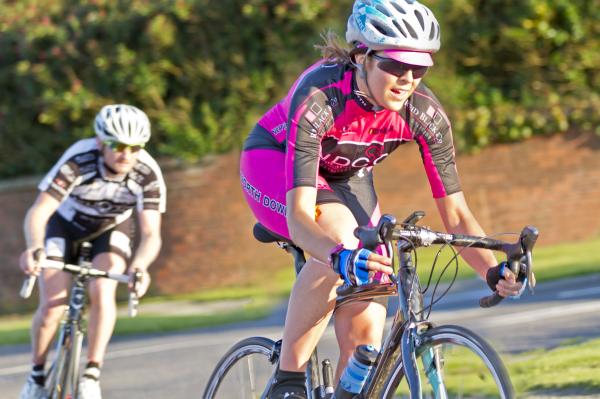 The amazing part of the story however is that Janine has only been cycling since March this year! Her path to glory started only twelve months ago on a stationary bike in the local gym but Janine soon grew bored of this and wanted a bigger challenge. Joining North Down was the next logical step with a run out on Harry’s popular Portaferry run. Some people take years to achieve this level but incredibly the next week Janine made the next step up to the main Portaferry run mixing it with the local road racers, taking her turns at front, and basically hanging in. Regulars on this run will remember Janine more for her cornering technique during those early days than her outright speed but certainly now she can hold her own with anyone.Apparently her new bike has solved her “corners like an arrow” approach to bends.

Of course Janine’s meteoric rise didn’t stop there and soon the lure of road racing was too much for her to resist. Starting with the club’s racing series at Kirkistown she soon had her eye on the local open racing scene which for ladies racing has been going from strength to strength in recent years. Choosing the notoriously difficult Madigan G.P. to debut she finished an incredible third place. Her confidence buoyed by this result the next step was the Ulster championships where Janine really made a name for herself. The Championships are amongst the most prestigious races in Ireland with only riders in top form coming to the start line with the hope of winning a national medal. The cream of Ulster’s ladies had arrived en masse meaning that Janine would have a hard day in the saddle ahead of her just to stay in the bunch.

The race itself, organised by Ballymoney CC, started quietly enough but by lap three the attacks had begun. Top Ulster ladies were attacking off the front with small breaks getting away. Amy Brice (Phoenix CC), who has been racing strongly all year got away but Janine bridged across creating a group of five riders. Included in the break was Elite Mountain Biker Claire Oakley (WXC Racing) so working together the girls managed to distance themselves from the chasing bunch. Working hard they pulled out a sizeable time gap and it soon became apparent that the medal winners would all be from the break. Coming up to the line Janine unfortunately found herself boxed in but managed to escape on the line taking an incredible third place, and bronze medal, at her first ever Championship race! An absolutely fantastic result finishing just behind two of Ulster’s top lades – Amy Brice and Claire Oakley. If this is what Janine can achieve after only one season of racing then the rest of Ireland’s ladies may have to content themselves with racing for Silver next year.

Speaking to Janine post race she was very enthusiastic about the support she had received from North Down over the season but hoped that perhaps next year a few more of the club’s ladies would be joining her at the races. Cycling is very much a team event so perhaps with a couple more of our female members joining the ranks it could be a North Down clean sweep next year at the Champs!?