The advantage of being Northern Ireland’s second largest club means as well as having more than our fair share of top flight strikers we have a subs bench of some considerable depth.  This weekend the club was ably represented in no less than four competitive events throughout Ireland. The elite mountain bike division closed out the XMTB McConvey Series in Ormeau Park. This has been a fantastic three race series providing competitive pre-season racing for mountain bikers. With sixty plus riders in the senior category alone it has provided  close racing in a location within walking distance of the city centre. The proximity of the series to Belfast ensured big crowds turning out to spectate adding to the carnival atmosphere.

Saturday saw a strong team of nine North Down riders making the short journey up to Carryduff for the Castlereagh CC John Moore memorial. The first move on the race occurred on lap two with Matty launching a vicious attack off the front with only two other riders feeling strong enough to go with him. One more rider then managed to bridge across bringing the break up to four riders. The lads  drilled it round the course though ultimately it wasn’t enough to keep the handicapped A1 riders at bay. Pro rider Peter Hawkins with local rider Fraser Duncan amongst others made it up to break coming close to line. Hawkins attacked immediately upon reaching the break and drove it on all the way home to the finish line. Matty stayed in the break  and managed a fine fifth place. 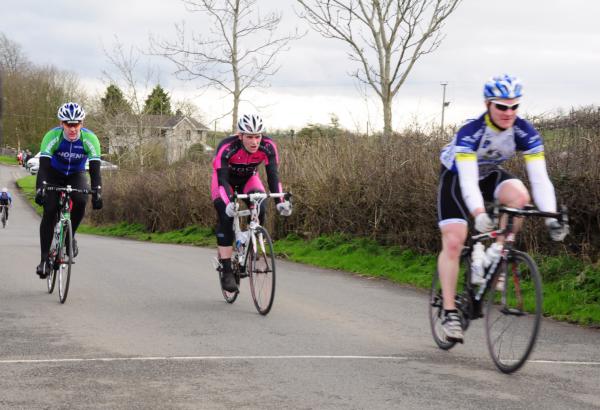 Special mention though to Eric for leading a club ramble up to the race to give some moral support to the boys doing the  racing. Always good to get a bit of support from the roadside. Well done to our ramblers for making the effort!
The action on Sunday then centred around Newry with the John Haldane Carriageway Classic. Another handicapped race giving the A3s and A4s a chance against Ireland’s fastest. Almost immediately a break of ten got away with our new star, Connor Hanna, showing his excellent race reading ability by jumping into it. Matty and Paul Ferguson were further back with a five minute handicap to make up. Paul punctured early though leaving Matty alone amongst the A1s and A2s. Once they caught the group up the road Matty was forced to sit up however so as to give Connor a chance to stay away. This allowed Connor to power his way to a top five position. With speeds in excess of 30mph at times Connor must be very pleased at staying off the front for the duration of the race.
A4 rider Barry Hamilton took a fantastic fifth place in the B race rounding out another dominant day for the North Down men. 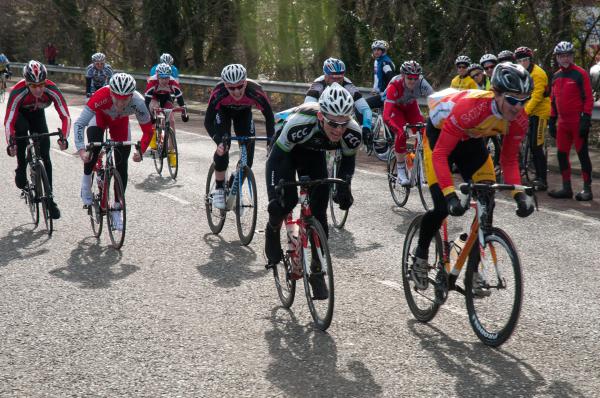 Sunday also saw Mark Irvine making the journey down south to Navan for the Cycleways Cup. A challenging 75 mile race which saw Mark involved in a few big moves.  The bunch was active though in chasing down the breaks but by the end of the race the high speeds meant the bunch had split with Mark staying in the top half. A good start to Mark’s season who will surely soon be taking his share of the glory too.

Don’t forget the annual NDCC Quiz Night  held this year on Saturday 31st March at 7.30pm in Pickie Bowling Club. This night is always a sell-out so members should ensure that they reserve their tickets early!!
This year the club has already secured over £200 worth of prizes for the quiz and ballot. As ever Mark Brooks of Bow Bells will provide a light supper. All this for only £5 per person!
Teams of no more than 6 people can take part but singles, couples and teams of under 6 are welcome to attend. Last year it was the young brains of the club who took victory – can they make it two years running?
This is a great opportunity for new members to the club to come along to one of our best social events. Remember friends and family are welcome too.
Some tickets are still available but sure to sell-out fast so reserve your tickets sooner rather than later to avoid disappointment.