With the generous support from  James Orr Engineering North Down entered a strong team for the Donegal Ras. This race is not for the faint hearted with three very difficult stages plus a hilly time trial. It’s a race that attracts big numbers too so if the team were to make any impact on the race at all they would have their work cut out for them.

Matty showed his intent however right from the start with a magnificent 6th place in a ninety-nine man sprint on the Ardara stage on the Friday night. This stage averaged over 26mph for the duration giving an indication of the calibre of riders entered.
After a strong showing in the Individual time Trial on Saturday morning the racers then moved onto Stage 3 . Matty attacked on the stage forming a break of nine riders gaining time on the bunch. Ray Brownfield was also very active on the stage with a bold but ultimately ill fated attempt to bridge across to the break.
Saturday night meant Matty and Eric were busy on the calculators, team sheet and crystal ball working out what was required to win the event overall. Strong consistent riding meant that Matty was a strong possibility for winning one of Ireland’s most prestigious races. Ray Brownfield and the rest of the boys got in an early night in preparation for the following day’s battle.
The team went into the final brutal stage with the knowledge that there was only one way to win this. Matty went away with a break early in the stage with a “death or glory” attempt on the GC. The break consisted of Matty Blayney (North Down), Jonathon Gibson (U/A), Liam Blanchfield (Bray Wheelers), Ian Richardson (UCD), Cormac Clarke (Cycling Ulster – Slane Cycles) and Thomas Faloon (Black Rose) among others. Missing from the group was the Yellow Jersey – New Zealand junior Sean Hambrook (VCC Morteau).
Riding strongly the break had a good time gap over the bunch with Matty lying second on the road overall at one point.
The break worked well together as the race progressed through Glenties and Portnoo building up a lead of over three minutes. The bunch only began to claw back time as the race returned to Ardara before beginning the arduous ascent of Glengesh but it was too late. Blanchefield and Clarke surged ahead in the final mile while The Prince and the rest of the break was captured by the peloton with Clarke taking the stage victory. Shane Farren saw his opportunity however when Matty was reeled in and overcoming his bad luck on the Bradshaw Brae Hillclimb rode strongly to a 7th place finish on the stage. Hambrook finished third but was almost two minutes behind Clarke giving the Newryman the overall victory.
Bad luck struck Michael McMullan who whilst riding a strong race had a puncture at an inopportune moment and had to ride the majority of the stage in on his own. Like the rest of the team he finished the race though rounding out another excellent performance by the North Down racing team. 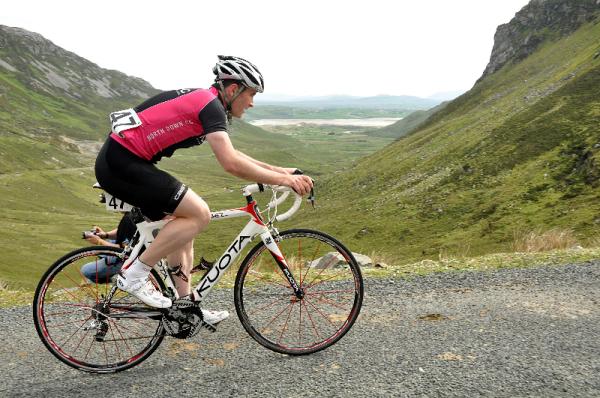 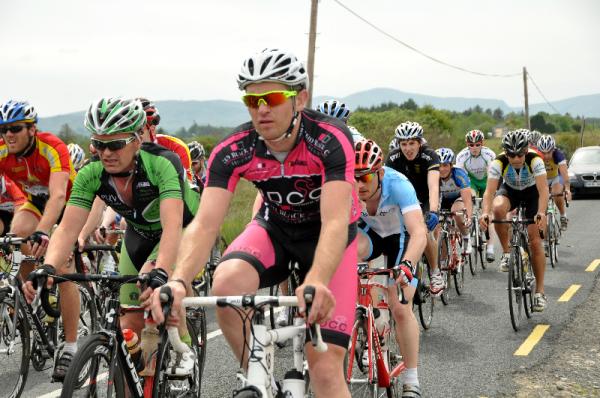 All pictures Courtesy of Marion Lamb

Good fortune shone on Eric and his glamorous team on Wed night. Considering Ards CC had to cancel their race the previous evening due to bad weather and it rained most of the day the club was very lucky to be met with a light wind and sunny skies for the second 10 mile time trial of the year. As ever the club event attracted the cream of Ulster’s riders with Eurocycle’s Adam Armstrong, the Ulster “25” champion and podium finisher on the Ras, gracing us with his presence. Ards CC, Peninsula Triathletes and Bikeworks had also sent their best testers too so the battle for the fastest time would not be won easily. Looking down the startline there was some serious firepower lining up. Disc wheels, modern carbon aero bike frames and even the latest electronic shifting. Of course mixed in amongst the dedicated speed weaponry were the “roadies” and recreational cyclists just out for a good night’s racing.
Eric seemed to have decided upon a policy of letting the fastest riders away first with Molly McLarnon and Ben Webb setting off early. There was some mild confusion further down the starting order however as he had rejigged Matty’s start for a more favourable position. The subtle hand of the Blayney Mafia going about it’s work…..

On the “A” event it was clear that Alison’s secret training with Ulster’s “big guns” on Sunday had paid dividends. Finally taking the fastest time from a class field of ladies. The “B” event was won by Eurocycle’s rider, Adam Armstrong, just back from a fantastic ride on this year’s Ras with our own Matty Blayney riding him hard to the line.
Ladies Race

Competitors must ride entirely alone and unassisted and not ride in company or take shelter (commonly known as drafting) from other riders or vehicles. A competitor overtaking another must pass without receiving or giving shelter. The onus of avoiding company riding shall be upon the rider overtaken. Garth Beattie for example.