As ever the club opened it’s racing program with a fantastic night’s entertainment on the Kirkistown Race Track. Record numbers turned up – 85 senior riders including four ladies and twelve children.

The race was won by Gary Cranston with Matty Blayney 2nd. These two broke away from the scratch group on lap 3 or so, caught and passed the handicapped groups. Ray Brownfield and Noel Boyce hitched a ride for a while, Noel went back to the bunch but Ray after being distanced held on for 3rd. The bunch sprint went to Sam Craig of Curran Racing from Richard McCullough, Ross Blayney and Paul Ferguson.

During the course of the race there was unfortunately an accident resulting in some riders coming off. Best wishes and a speedy recovery to Mark Hedley, Mark Brooks, Stephen Cousins and Louise Tognieiri.

The children’s race was won in fine style by Jack Anderson from Ben McDowell and Ben Webb.

Many thanks to our helpers, without whom the events could not be run. Eric, Ruth, Kathleen, Christine, Angela and Red Adair.

Keep Wednesday 16th May free for the Club “25” on the Portaferry Road. Always a tough event and it’s always exciting to see who manages to break the magic “hour”.

Things are hotting up for cycling’s Northern Ireland Road Race Championships, and North Down Cycling Club are delighted that one of North Down’s foremost restaurants, The Bokhara, in Kings Street, will again be supporting the event. As the restaurant’s proprietor Jahiru explained, he always has a desire to encourage young people in sport. 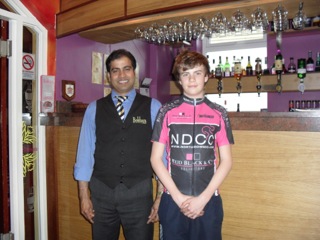 Will Hamilton and Jahirul from The Bokhara

The racing, which is being promoted by North Down Cycling Club, is taking place on 20th May. First off at 10.00 am will be the Northern Ireland Youth Championships for Undr 14’s and Under 16’s. The course will be that used in last year’s event, and will start in Donaghadee, taking in Springwell Road, High Donaghadee Road, Stockbridge Road with the finish line at the top of Orlock. The Under 14’s will cover this course three times and the under 16’s will cover it four times, a distance of approximately 19 and 25 miles respectively Big hope for the North Down club in this event is Will Hamilton. Will has burst unto the cycling scene this year and has made an immediate impact just finishing off the podium on two occasions. Perhaps his best performance was last weekend in Banbrdge in what is considered to be one of the toughest courses when he rode superbly well to finish in 5th position. Also on the course at the same time will be a non-championship race for Over 50’s. They will complete four laps of the course, a total of approximately 24 miles. This section of racing this year has been a revelation with large fields and top class competition. It is also a sphere, which has been totally dominated by North Down riders. Noel Boyce and Noel Munnis have been quite simply unbeatable and they have been ably supported by the likes of Ian Blayney, John Hunter and Michael Crowe. To encourage some of the club riders who are new to the sport and perhaps have enjoyed the club racing at Kirkiston, a handicap will be introduced in this event for the first time. The experienced scratch group will be asked to close a gap of one minute on the less experienced riders, which should add greatly to the competitiveness of the event.

At 12.00 pm there are a further two championship events, which are sponsored by Chain Reaction Cycles. Firstly the ladies will race over 3 laps of the longer High trees, Groomsport, Springwell circuit, with the finish again at the top of Orlock, a distance of approximately 26 miles. First to enter this event has been the redoubtable Heather Foley (nee Wilson). Heather has dominated ladies racing in the Province in recent years and she will be returning to the Springwell course to attempt to win her third consecutive championship on the course. In opposition will be some of the North Down ladies who have impressed this year. Riders such as Louise Tougneri, Kerry Speers and Alison McMullan have demonstrated that they have the ability to challenge for a podium place on this tough local circuit.

The premier event of the day, the Chain Reaction Cycles Northern Ireland Championships will also use the longer circuit and will cover no fewer than nine laps, a total of approximately 74 miles. This is arguably one of the best single day classics in the country and has produced many exciting races. Last year was no exception with young Richill rider, Peter Williams taking the verdict in the closest of finishes. This year there are several North Down riders who will be challenging for overall honours. Shane Farren has been in great form recently as has Richard McCullough. Perhaps the main money will be on Matty Blayney. Matty certainly has the sprint to match anyone in the country and his fine podium performance in the Gorey Three Day, at Easter, demonstrates that he has the ability, tenacity and race craft to compete at the highest level. The local support for the riders in pink and black could prove crucial and who’s to say the Northern Ireland Road Race Champion for 2012 will not be from the North Down stable.

There will be a marshals meeting on Monday at 8:00pm in the Clubhouse in Bangor. Members don’t need to be reminded that holding events of this magnitude require the support of everyone in the club. As per last year if members are racing the afternoon they will be requested to assist in the morning and vice versa. Please bring along any friends or family that wish to help out as all support is much appreciated.

So with club membership approaching 230 we should see a packed clubhouse on Monday night!