It was the first big bike holiday weekend of the cycling season with an action packed three days of racing and touring for the men and women of North Down CC. Just about every cycling discipline was catered for with events for juniors and seniors alike.

Action kicked of on Friday evening with the Hugo Loughran GP promoted by Island Wheelers at Derrytrask with races for both A3 and A4 riders. As ever there was a strong North Down presence in both races.

The gaining of points was on everyone’s minds and the pace in both races was high throughout. It was a tactical game as the narrow roads were made hazardous with outbursts of torrential rain meaning that it was hard to get through in order to go free of the bunch in the 6.4 mile circuit. Unfortunately our riders found themselves boxed in as both races came down to a bunch sprint.

Up next was Ulster’s most demanding stage race – The Tour of Ulster. Starting on Saturday and finishing on Monday the race was promoted by Carn Wheelers with assistance from Clann Eirann. Three stages with a short time trial in the Maghera area for good measure racing against Ireland’s finest meant that our “Men of the Ras” squad would have a good workout prior to the Ras in two weeks time. Dave Watson was our best finisher taking 4th A2 rider. 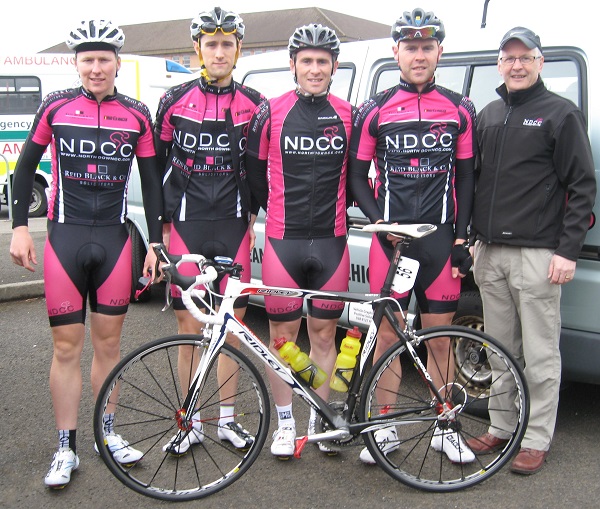 Men of the Ras – Picture courtesy of Dave Watson

This should give our racers a small taste of what they will experience during the 2013 Ras and was certainly an invaluable experience.

The Tourists were out again for the second time this year. The legendary Tour of the Glens. 200 kms with 7000ft of climbing starting in Belfast and heading out over the Glens of Antrim for the day. This event is considered the Queen of Ulster’s touring events with many of our riders having a love/hate relationship with the event. Eric Blayney in particular having completed the gruelling course no less than 9 times over the years! The start of the event has been on the Shore Road of recent years, having previously been the City Hall, though the true hard riders of climb traditionally ride up from Bangor adding another masochistic 25 miles onto the total.

Rostrevor Mountainbike Festival in Association with Newry & Mourne District Council took place at the weekend 4th – 6th May. Practice kicked off on Saturday 4th May and three local clubs, each specialising in different disciplines, organised the events ensuring a very special rider experience.

There were a few new faces to Mountain biking with Molly McLarnon having her first taste of mountain biking racing. It was a baptism of fire for her on a tough course but Molly is a hardy competitor and will surely pick up the skills sooner rather than later.

It was Monday’s event though were North Down picked up the silverware. A relatively new mountain bike discipline – enduro – was were the medals were won. Ross Blayney, perhaps more commonly thought of as a “roadie” these days took 2nd in his category on his first attempt at the discipline. The older members of the club will remember Ross as a dominant junior mountain biker however having won many events on the mountain bike in the past. Our newest mountain bike rider Aaron McCutcheon took the other medal for the club finishing an outstanding 3rd in this demanding discipline.

Altogether a full weekend’s cycling with the club represented in just about every discipline. Well done to all riders who made this bank holiday weekend a pink and black one.