The weekend saw the start of the racing season for our road racers. After months of winter training including hours spent in the gym and cold garages on turbo trainers the men and women of North Down CC were to find out just how effective their training has been.

Over a bitterly cold weekend which saw occasional flurries of snow the men and women of North Down CC were to open their 2013 account. Whilst all racing in mainland Europe was brought to a standstill due to the weather the organisers at Annaclone and the Phoenix GP proved that we’re made of sterner stuff in Ireland.

The 2013 season sees the launch of our new ladies team with Director Sportif, Ian Blayney carrying the heavy burden of responsibility. He didn’t need to worry however as our “Ace in the Deck” Janine McNally took up where she left off last season with her first win of the year. The rest of the ladies had a fantastic race filling much of the top ten. Unfortunately Lyn Gawley went down in an accident and hopefully those cuts and bruises disappear soon. It was a fantastic season opener for our ladies with many other top ten positions taken. Alison McMullan suffered bad luck with a puncture however within view of the finishing line which robbed her of a top ten finish. Alison is a determined competitor however and this will only motivate her even more for her next race. Without question our ladies team with be bringing home the trophies right through the rest of the season. 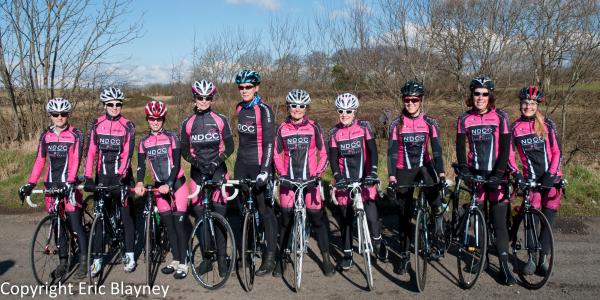 The cold weather didn’t keep the men at home either with a full turnout from our road racers. All categories were represented with pink jerseys involved in all the moves. The A3 group in particular was well represented. Paul Ferguson looked strong after his time spent in hospital last year and it was good to see Duane Looking competitive again after a solid winter’s training. Noel Boyce has made a welcome return to men’s racing and will soon be returning to his winning ways. Shane Farren had bad luck however suffering a puncture mid race putting paid to his chances.

North Down “man of the match” however was undoubtedly Dave Watson. Spotting a dangerous break getting away early in the race he bridged across on his own to join them at the sharp end of the race. Lap after lap the break stayed away working hard as they kept the bunch at bay. Gradually the peloton began to claw its way back and by the penultimate lap Dave’s incredible four year layoff was beginning to tell. He hung in however with a fast fragmenting group and came in just ahead of the bunch with only a handful of seconds to spare. Spurred on, no doubt, by Dave Watson Snr, who was nursing a few bruises after a tumble on Saturday, Dave has set down a marker for his 2013 ambitions.
It’s going to be another big year for our North Down racers if this opening weekend is anything to go by. 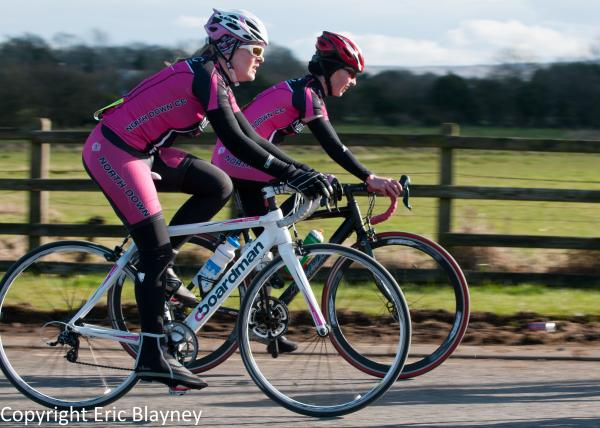 It wasn’t just our road racers in action at the weekend. Sunday also saw Round 2 of the popular McConvey’s Mountain Bike Race at Ormeau Park, Belfast. Recent resigning to the club, Lewis Ferguson, stormed to a fantastic 2nd place overall in the men’s race. Coming in just behind seasoned racer Matty Adair means that Lewis also should deliver some fantastic results this year. Some of our newer members may not know Lewis as yet but he has recently resigned for North Down after a spell away in a North Down Development Squad. He’s a top rider with big results both on the road and the mountain bike.

It wasn’t just the senior men racing however with Aaron McCutcheon, Johnny Cheyne and Luke Myers taking part against stiff competition in difficult conditions in the junior races. Well done to all our competitors over an action packed weekend.