The spectators were treated to an excellent day’s racing at the Chain Reaction North Down Grand Prix on Saturday. From early morning riders were arriving at the race HQ from all corners of the country. In the morning there was a series of races for the youth riders and the over 50’s. In the afternoon the stage was set for excellent racing with full fields in the A4, A3 and A1/A2 races. All the events were run off in beautiful sunshine on the hard Groomsport, Springwell, Donaghadee Circuit. 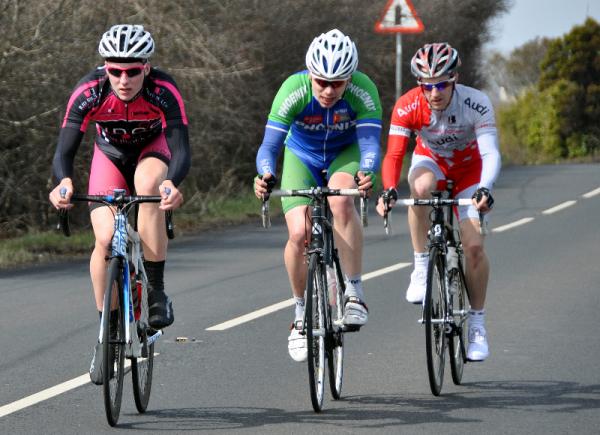 The under-age races, which were sponsored by North Down Borough Council, really set the standard for the whole day’s racing. The under sixteen race, for instance, was characterized by aggressive racing throughout, especially on Springwell. From the flag was dropped the young riders showed that they meant business and a lead group of four was quickly established. In the sprint for the line Lurgan lad, Declan Mulholland once again demonstrated his sprinting ability by edging out James Mulligan (Newry) with Donegal rider Evan Donoghue third.

In the under 12 race North Down had its first victor of the day in the form of Molly McLarnon. Molly is making the beautiful habit of not only climbing the podium, but climbing to the top rung. Saturday was no exception and she left the two Clann Eireann CC riders James Mullholland and Ruari Grimes in her wake, as she sped to a convincing victory.

Another young local rider who made a great impression on Saturday was Harry Dow who rode in the under 14 race. Harry is a newcomer to the sport, but it is obvious that he has a bright future. Harry rode strongly all day and was always at the head of the race. In the end it boiled down to a sprint and he was narrowly beaten by Cookstown rider Harvey Barnes (East Tyrone CC) and Liam Wilson (Clann Eireann CC), both of whom are much more experienced than Harry.

Other local riders to catch the eye in the under 14 race were Adam Preece, Katie Armstrong and Oliver McDowell. With such strength in depth, in the under-age department, North Down can look once again look forward to dominating youth racing in the very near future.

At the other end of the age spectrum the Masters races have been a happy hunting ground for North Down riders in recent times and Saturday was no exception. The pink and black was always at the front. Once again it came down to a sprint with Phil Beattie of Banbridge crossing the line ahead of our own Martin Lyttle (North Down CC), with Ian Cochrane (Banbridge CC) third. Michael Toland (Phoenix CC), Ian Blayney (North Down CC) and Brendan McAllister (Glens CC) completed the top six.

The large group of women set off at noon to contest four tough laps of the course, a distance of approximately 50 km. In the second lap a group of three riders broke clear. These were Roisin Kennedy (Adamstown), Judith Russell (Phoenix CC) and Claire Oakley of XMTB /McConvey Cycles. These three women worked hard together and steadily increased their lead on the chasers. Coming to the line it was Oakley who out sprinted Kennedy to take the win with Russell taking third. Hayley Priestly (La Lanterne Rouge) got the verdict over our own Janine McNally, Louise Togneri and Rachel Mitchel all of whom had ridden strongly to bring back the trio in the break.

A full field of eager A4 riders started the support race, which completed five laps of the course. Once again there was some aggressive riding in the bunch which resulted in many riders getting dropped. Nevertheless, entering the penultimate lap there was still a large group at the head of affairs. It was at this juncture that Sean McIntyre of (Shelbourne CC), managed to detach himself off the front. He quickly opened up a lead of a minute and half on the chasers and soloed home to take the win. The remaining places were always coming down to a bunch sprint. It was here that two newcomers to the ranks of North Down, Sean Carey and Andrew Gregg showed their class by taking second and third, respectively. It was also good to see another North Down rider, Andy Young, back in action after a long lay off due to injury. He clearly has lost none of his zest for the sport taking a top ten position in his first race back.

The A3 race was to prove to be a dramatic event. Almost from the gun Ian Inglis of Curran Racing jumped clear of the bunch and only Conor McAteer of Bann Valley was strong enough to go with him. These two rode very aggressively and ended up catching the A1/A2 race which had been set off before them. It became apparent that the fast moving A3 bunch was also likely to catch the A1/A2 group and the Commisaires reluctantly decided to stop the A3 race and then restart it giving the A1/A2 race an increased gap and those who had distanced themselves from the A3 peleton, their time advantage. Inglis set about increasing this lead and he succeeded in doing so, but he eventually paid for his efforts with the bunch catching and dropping him.

The racing was fast and furious through out, but it wasn’t until the last lap that a break away managed to escape. This break away included North Down’s Richard McCullough and with Ross Blayney and Paul Ferguson marshaling affairs on the bunch it looked odds on that Richard would take his first victory of the season. Unfortunately, an accident on the course resulted in the race having to be initially stopped with less than 2 miles to the finish.

In the main race of the day the riders faced eighty miles of hard racing. In spite of the tough conditions three riders took the brave decision to go clear. They were Marcel Kock (Phoenix CC), William Larmour (East Antrim Audi) and Connor Hanna of the promoting club.

Connor has been training hard this season in readiness for the biggest race in Ireland, the Ras, which takes place in May. It is obvious that the PhD student is putting all the hours on the bike to good use as he rode strongly for each of the 80 miles. Another rider who was making his presence felt in the peleton was Dave Watson. This is Dave’s comeback season and he certainly demonstrated on Saturday that whilst fitness is temporary talent is permanent. He like Conor will be lining up in the colours of Pink and Black to represent Down in the Ras.

When on-form Dundalk rider, Bryan McCyrstal (Cuchullainn) and the ever strong Fraser Duncan (who riders for the Dublin based Eurocycles team) James McMaster (Curran) and prolific winner Alastair Macauley (Phoenix CC) joined the break away trio it became obvious that no-one else was going to be able to bridge the gap.

In the end Duncan powered home a clear winner from McMaster, McCrystal. Macauley and Hanna. However, it was Connor who was attracting all the attention after the race. This was a tremendous performance and one that augurs well for the future.

All in all it was a promotion that North Down can be proud off. Special mention must go to the Race Director, Matty Blayney. Whilst his fellow competitors were resting and preparing for the big race, this A1 category rider was up late the night before preparing start sheets, catering and setting up barriers. The morning of the race saw him out at dawn erecting safety signage, organizing marshals etc etc. This speaks volumes of the man.

But Matty would be the first to admit that the hugely successful event was a reflection of the professionalism and eye for detail of the North Down club and the band of workers who were prepared to sacrifice their time for the benefit of others. As the secretary of Cycling Ulster, Marian Lamb commented after the event: ‘The club should be proud of the standard of safety and the measures which were put in place and the number of marshals who stood in the cold all day. This was a great effort by the club.’

Roll on the next big North Down promotion, The Coastal Challenge.

After his exertions on Saturday, Dave Watson was ready for the fight again on Sunday. He travelled to County Meath for the highly prestigious Stamullen, Grand Prix. Dave is showing that he is gradually reclaiming the form that made him one of the hottest properties in Ireland a few years ago. The tough race, which includes the Naul climb, was won by former professional Padi O’Brien with Dave taking 8th place ion the A2 category.

Martin Piper and his team of marshals were busy again last Wednesday night. It was his second event at the helm and conditions were again wintery with high winds and low temperatures. It didn’t deter our members though with another big turnout of riders keen to test their skills “contre le montre”. There was little change at the top of the ladies table with results looking very similar to 2012 with Louise Togneri leading Alison McMullan home. The juniors had a good race too with Will Hamilton cementing his credentials as a “star of tomorrow”.
Paul Ferguson was perhaps the surprise in the supporting men’s Time Trail taking third place. It was Paul’s first outing on his time trial bike and reckons there could be a bit more speed to be found with a few minor tweeks so it could be that those top two positions could be under some pressure when it comes to the club “10”! David Hamilton also deserves special. Setting a blistering time on his first outing sets him out as a man to watch.
Thanks, as usual, to our marshals. It goes without saying that these events could not be run without them.