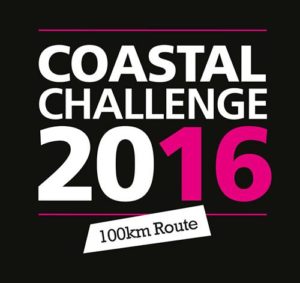 scaling the North face of Mount Everest, but this could not be further from the truth.  It is certainly is a long way but then it isn’t called a Challenge for nothing and is easily within the grasp of anyone willing to give it a go. Having started in 2001, hosted by North Down CC, the Bangor Coastal Challenge was considered to be one of the first sportives of its kind in Ireland.  Due to its popularity and being limited to 1000 riders, it always ends up oversubscribed.

Those of us who regularly cycle around the Peninsula take it for granted and probably do not fully appreciate what we have on our doorstep.  A route that has the sea on one side with views across to Scotland, and countryside on the other it really does rank as one of the best in the British Isles.

Passing through towns and hamlets, the Coastal Challenge makes its way from Bangor Sportsplex to Portaferry with its stunning views across the Narrows to Castle Ward.  After a refreshment break, the riders will skirt the shores of Strangford Lough, taking in all this inlet of water has to offer.  The wildlife and scenery should help to take the pain from weary legs, as it winds through Kircubbin, Greyabbey and Newtownards before heading back to the Sportsplex.  As an incentive, if you finish within 8hrs you will receive a specially commissioned t-shirt to help you remember the day.  If you are concerned about safety, there will be marshals and local police out to assist riders, and if you are unfortunate enough to have a mechanical failure or you just end up too puffed to finish, a ‘broom wagon’ is on hand to sweep you up.

The Bangor Coastal Challenge is the primary charity fund raising event the NDCC runs, and has been doing so for fifteen years.  Over the years, charities have benefited to the tune of tens of thousands of pounds, the focus on assisting those local to North Down and the surrounding area.  In the past, The Samaritans, Ulster Hospital, Salvation Army and St Vincent de Paul have all received cheques from the club to aid in the great and necessary work they do.  This year the charities will be:

New for 2016 is the Ride to Pickie.  Aimed at kids, this is a great opportunity to ride on

public roads (with a rowling road block & marshalled by NDCC & PSNI) from Bangor Sportsplex to Pickie Funpark.  When you get there, you will be rewarded with a fun filled morning.  As well as a goodie bag,  there will be a bouncy castle, the swans and train to ride on.  So don’t delay, sign up today!!

The An Post Ras started on Sunday 22 May, with the NDCC team representing County Down. 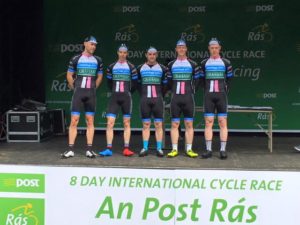 Things did not get off to the best of starts with a crash just 25 minutes into the race, forcing Dave Watson to use his spare bike.  With seven more stages to go, we can only hope that good fortune stays on their side and all the competitors stay tarmac side up.  There will be a more detailed review next week.  Thankfully all the riders finished safely and within the time limits.

North Down were just out of the prizes this weekend at the Bann Wheelers GP held at Ringsend on Sunday.  Gavin Moore picked up a few more points in the A4 race by finishing 5th, he should be upgraded shortly while team mate Keith Phillips was 7th in the A2/A3 race.

Hilly Time trials are back!  It’s official!!  Stage 15 of the Giro d’Italia saw riders grinding up an Alp in the race against the gravity and the clock, and so did NDCC by reintroducing an old discipline on Bradshaw’s Brae.  An inspired route, thought up by Club Stalwart Eric Blayney, the course took in three laps of the Brae, Ballyrogan Road and Milecross Road.  These events aren’t everyones cuppa but there was a good turn out of riders and marshals.  Despite a couple of mishaps, a wrong turn and the forgetting of shoes, the event ran smoothly and more importantly safely.  The success on the night means it will be on the calendar for a few years to come.