Doubling up as Round 4 of the Ulster Mountain Bike Series and the WPFG mountain bike event the popular Rostrevor course was utilised for racing for the second time this year. After our “summer” weather resuming normal service competitors were under no illusion as to what to expect during practice on Friday. After the dusty, dry trails at Garvagh Forest two weeks previous everyone knew that mud and deep puddles would be back on the agenda. 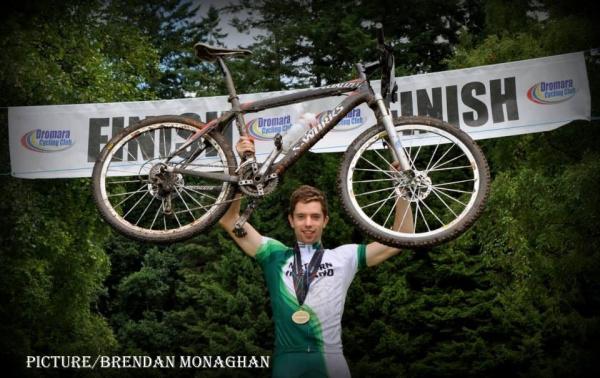 It was obvious even from Friday’s practice that the WPFGs had attracted a huge international contingent with various languages being heard around the course. The course wasn’t without it’s controversy however. Being an “Old Skool” natural forest course it was well suited to a good hard mountain bike race regularly enjoyed by natives to Ireland. To visitors from warmer climes however the steep mud bank descents with exposed tree roots was a challenge never before seen requiring some getting used to.

Martin Grimley and Dromara C.C. had done a fantastic job on the course however and coupled with the army of WPFG marshals it was obvious that Saturday’s races were going to be a memorably epic day out for both Irish racers and the WPFG competitors.

Come Saturday it was the WPFG competitors who were first out to race. Fine weather greeted the international field and there was a fantastic carnival event atmosphere in Kilbroney Forest with all the crowds, food tents and trade shows covering every available spare metre of space.

The WPFG race started just after 10 am with riders from 16 different countries taking part. The riders were split into age groups as defined by WPFG’s regulations with the younger riders having to complete 6 laps and the oldest competitors having to complete 3. Whilst the main WPFG race was underway, the youth categories for the Under 6s, Under 8s, Under 10s and Under 12s took place on the Touring in the Trees site, which had separate courses for each of the age categories, independent of the main course, which the WPFG competitors were using.

Lewis Ferguson, top North Down C.C. mountain biker, was on the start grid representing the N.I. Fire Brigade. Lewis has had a great year so far on the mountain bike with a strong showing at the Irish Championships only two weeks prior.

Lewis attacked from the gun heading straight into the steep climb up through Kilbroney Forest. By the time he turned off the ascent into the technical singletrack he had already built up a sizeable lead. Anyone who has competed against Lewis will know that if you let him onto the tricky stuff first that will be the last you see of him until the finish line. Using his exceptional downhill skills to devastating effect he further distanced the international field floating over the slippy roots and attacking the steep descents with barely a dab of the brakes. Lewis continued to pull out a good advantage taking his lead all the way to the finish line finishing an imperious six minutes over second place Belgian rider. A Spanish competitor closed out the podium making for a truly international top three and a magnificent gold medal for North Down’s Lewis Ferguson.

In the Ulster Cross Country round held later in the day we had two North Down riders competing with Johnny Reid taking fourth in the S3 race, narrowly missing a place on the podium by a mere two seconds!

Well done to all North Down riders – Lewis in particular adding to North Down C.C.s medal tally in the WPFG and special thanks to Eddie from XMTB for performing bottle duties with such professionalism!