Sunday 20th November  saw our battle hardened ‘cross team make the short trip up to Ormeau Park in Belfast.  It was the usual team of Michael Hamilton, Michael McMullan, Garth Beattie, Colm McLarnon and nephew and niece combination Ross and Matty Blayney. Most travelled up in the North Down bus though Garth made his own last minute travel arrangements.

The fabulous weather and City centre location drew out the crowds for the day with every ‘cross event now proving a big draw for spectators.

As well as being round 5 of the Ulster ‘cross series it was to double up as the Ulster CycloCross Championships so it was to be a high profile event in Ulster calendar. There was a stellar field in attendance with riders from across the Irish Sea making a showing plus An Post professional Conor McConvey as well as ‘cross experts Roger Aiken and Matty Adair. 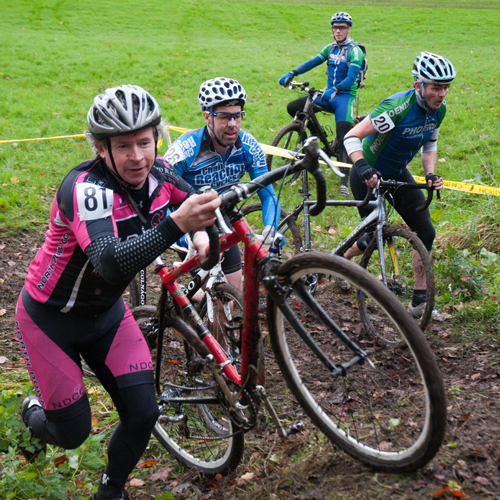 Before the main event though there were the support races to be run and it was great to see the new generation of North Down racers cutting their teeth in the under 12 and under 16 mountain bike support races. Congratulations to Max, Jody and Molly on epic rides. Jody in particular bagged fifth in class and will provide training tips to our senior team upon request.

The weather was glorious and the organisers had set up a fantastic course. It had plenty of single track action, the ubiquitous grass field, fast uphill tarmac drag into the start/finish area plus a steep bank to ascend that had riders clambering for traction. Once the flag dropped 50 plus riders were straight into the forest jostling for position. Ross and Matty were up near the front holding their own at the sharp end of a very strong field. Not much further back  Colm was having another great race. Showing remarkable bike handling skills for a sailor he was having another excellent race representing the Pink and Black. He and Michael McMullan battled it out for most of the race with Michael finally gaining the upper hand.

The nature of the conditions made tyre pressure an issue with many riders choosing to run a lower pressure to find some extra traction. Unfortunately this policy is not without its risks and a sharp blow to the wheel can cause a puncture. This was to afflict Michael Hamilton who unfortunately had to retire after 40 mins with a puncture.

Garth continued on enjoying his first ‘cross season employing an imaginative approach to what is traditionally considered “the racing line”.

While all this was going on Matty and Ross were battling away at the sharp end of field. Unfortunately the high pace at the front became too much for Ross to live with though Matty was showing no signs of fading under the intense pressure. While not quite as fluid over the roots as Ross he was lapping with the consistency of an expensive Swiss watch. Matty kept this savage pace up to end and was rewarded with an excellent result knocking on the door of a top ten position. Those early nights, the closely monitored diet and total abstinence from alcohol had finally paid dividends with a highly placed finish amongst distinguished company. 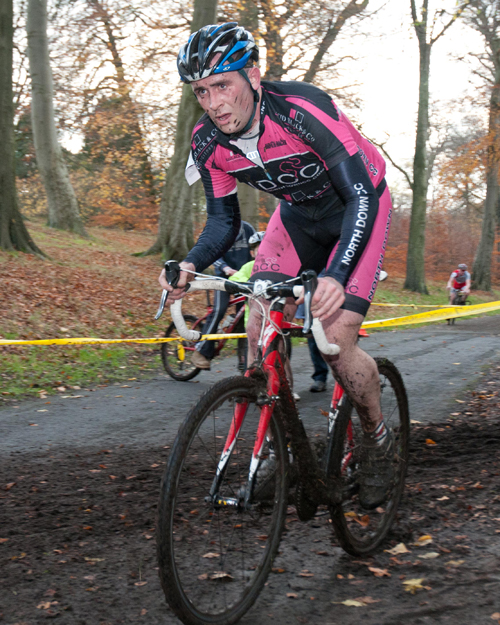 Don’t forget the second hot port run on the 10th Dec! The format is much the same as previous years, leaving the Club rooms at 09:00 am and heading to Newtownards, Comber and then meandering through country lanes to Strangford where we’ll board the ferry to Portaferry.

We’ll be stopping for soup and sandwiches in The Barholm which overlooks the slipway in Portaferry. There will be alternative runs taking shorter routes to the lunchstop.

The cost for lunch is £4.95 and you will need a pound for the ferry.

Congratulations.
Congratulations to Neil McKenna and his wife Kathryn on the birth of their baby daughter Emily. Neil has been a North Down racer and prolific winner for many years and all at North Down would like to wish this popular athlete and his family best wishes for the future.

The first sign-on night will take place on Wednesday 14th Dec in the Clubrooms. Flo and her band of helpers will be there assist you to renew your membership or join the club for 2012. Other nights will be held in January. The hall will be open from 7:30pm.

Members can also renew membership online directly if they wish with Cycling Ireland but remember club dues are also required to be paid to NDCC.

On Thur 29th December the club will be hosting the annual Mince Pie Run! This run is purely social and aimed at families and children. There will be a short leisure ride however for adults  with even shorter runs the kids. It’s always a lot of fun and there will be mince pies and tea/coffee post ride.  As per previous years the ride will leave from the Marquis Hall on Abbey Street at 10am.