The Ulster 25 mile time trial championships were held a couple of weeks ago on the A4 Dungannon to Ballygawley dual carriageway.

The event was promoted by the UCPC for the first time and they pulled out all the stops to make this a memorable day. The weather was dry and very mild with the temperature sitting at 20 degrees with a slight wind

The course along the new carriageway from Dungannon to Ballygawley was excellent in that the surface was smooth and there was little traffic. There was a climb or long drag on the course, which proved tough, but fast times were still recorded. 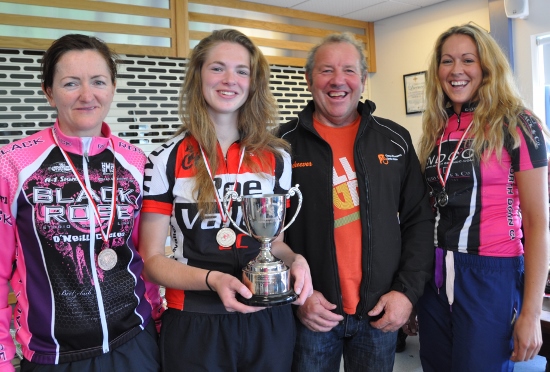 Fastest Ulster man on the day was Daniel Stewart of EC Mayenne who lifted the title in a time of 53.44, Surprise medallist on the day, however, was local man Fraser Duncan of Eurocycles riding his very first 25 mile TT. Fraser has had a great year and is the current Ulster Road Race Champion. As an adopted North Down rider Fraser is well known by all the club and everyone at the club is delighted to see him do so well.

There was good turnout of women for the event making a real competition on the day. Laura Maxwell of Roe Valley who has shown consistent form all year added both the Junior and senior women’s 25 mile TT titles to her collection with a time of 1:02:54. She was followed in by North Down’s very own Marianne Vos – Janine McNally who took silver with a time of 1:04:20 Both these women are not long back from riding Rás na mBan, Ireland’s only women specific stage race which featured many international teams. It caps a fantastic season for Janine making her, by far, our most successful senior rider of 2013.

Dates for your Diary

There are a few important dates coming up over the next couple of weeks that you may want to take note of. The club AGM will be held on Wednesday 6th November at 19:30. As usual the venue will be the salubrious surroundings of the Club House at Ward Park. Don’t forget that it’s YOUR club so please make an effort to attend. This year there are some great committee roles up for grabs so why not come along and nominate your friends!

Then the action moves to Pickie Bowling Club for the social event of the year. Prize night will be Saturday 30th November at 19:00. Please be aware that since the building is licensed all children must have left the building by 21:00. Please ensure that all perpetual trophies are returned to Eric Blayney cleaned and engraved in plenty of time.

In between these two milestones in your social calendar there will be the second North Down Cyclo-Cross race held at Aurora Leisure Centre on the 27th October utilising Castle Park. Building on the success of last year’s race at Ballymacormick the 2013 edition should prove to be another great race with arguably our strongest team of ‘cross racers for years. If not actually racing then why not turn

up to help marshal the event or even just come to cheer on our hardy racers. It’s a great spectator sport with fans able to see the entire course and get right up close to the action!