The Tour of the North International stage race takes to the roads of Northern Ireland during the Easter weekend. The NICF promotions group headed by Ballymena woman Joan McCullough(race director) has organised a challenging route comprising of three road races and one time trial.

The stages all start and finish in Ballymena and take in the roads of counties Antrim and Derry/Londonderry. One hundred and ten riders will race almost 200 miles in the three days. Stage One on Easter Saturday 4th April is a 65 mile loop in the Glens of Antrim with four King of the Hills primes. This will be a hard start to the weekend and the peleton will no doubt split into several groups. Easter Sunday begins with a 4 mile individual time trial in the morning which should see a further sort out of the general classification. In the afternoon Stage 3 is a 63 miles road race based on an eleven mile circuit between Ballymena and Randalstown. The final stage on Easter Monday is the longest of the weekend at 70 miles (113 kms) and it takes the riders on a loop around Co Derry/Londonderry including 2 major climbs at Springwell and Cam Forest. Detailed information of the route and passing times can be found on tourofthenorth.net website.

This is the 51st edition of the Tour of the North. Former winners include the former world number 1 Sean Kelly (1976) and more recently the 2013 World Scratch Track race champion Martyn Irvine from Newtownards who won the 2009 race.

The race does not have a head line sponsor this year but it has secured backing from cycle clothing company Powerhouse sport and Ballymena Borough Council.

The start list includes teams’ from the United Kingdom, Ireland France and Holland. 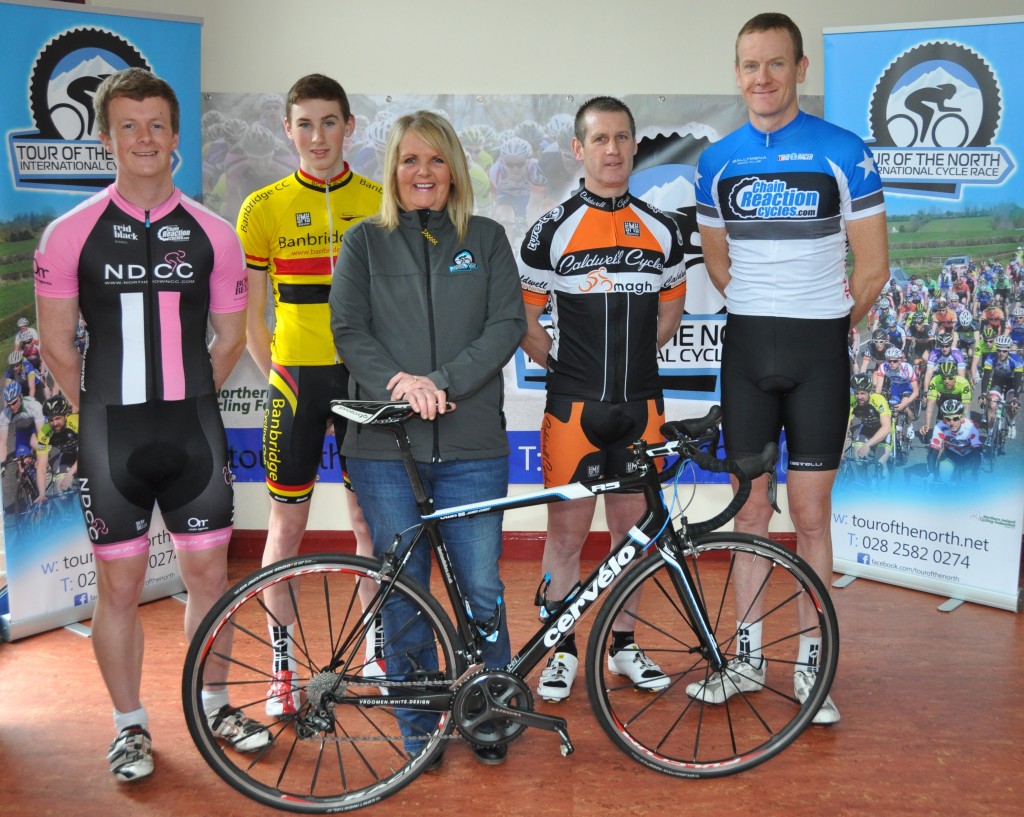 Included in the photograph are competitors who will be on the start line of the tour at Easter, David Hamilton (North Down CC) winner last month of the John Moore Memorial race, junior rider and U23 James Curry (Banbridge CC) one of Irelands best junior cyclists who has attended the UCI School of Cycling in Switzerland, Paul Mulligan (Caldwell Cycles) Omagh) the current Ulster Veteran road race champion who has competed many times in the Tour of the North and local man Hall Booth (Ballymena RC) who has raced successfully for over 20 years and also holds a position on the organising NICF committee.

The field is a good mix of local riders and visiting teams so it promises to be an exciting contest for the coveted yellow jersey for race winner.

The race also includes an Under 23 year old competition in which the leader wears a white jersey and the King of the Hills spotted jersey.