Cycle Tourists in the “know” debate the hardest touring events in Ireland. The Tour of the Glens and the Wicklow 200 are often bandied about but often in the same breath the Dromara Hilly gets a mention. Frequently its climbs are talked about many months later long after the aches and pains have subsided from the legs.

Our touring team of fit men and women aren’t deterred by such legend however and as ever a strong group lined up to test themselves against the 2013 edition. Having first braved the trip down in the Club Bus they signed on, dressed in early Spring kit (it is August, after all) and set off. Most riders opted for the 125km route whilst some of our newer riders tackled the 85km course. 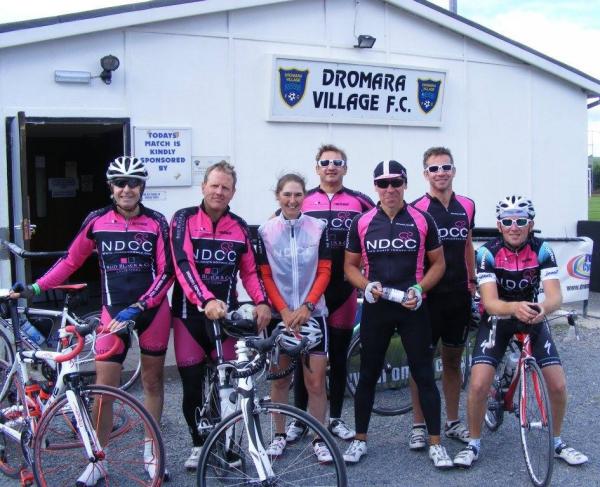 An advanced raiding party had set off slightly ahead of the main group comprising mostly Dave Kane cyclists including North Down renegade Glen Armstrong amongst others. It’s well known fact that it is wise to hit Cornmill in a small group of riders of similar ability. Cornhill is a climb famous for it’s steepness with many videos on “Youtube” of riders coming to a standstill then comically falling over on its steep slopes while even the strongest riders experience rear wheelspin due to the gradient. This was quickly dispatched however without drama with riders pushing onto Dree Hill, a climb well known to our stage racers, having blown many a road race apart over the years. It was an inclement day however so a quick regroup was necessary, as gilets were required for the high-speed descent down off the mountain. Shortly after this point special thanks should be given to local farmers for performing the important civic duty of transferring the thorns on their hedge to a half-inch deep carpet on the public highway. Miraculously no punctures were picked up allowing the riders to push up and over the Windy Gap with just a fast descent down to Leitrim for a much needed food stop.

Post lunch, legs were already beginning to feel heavy by this stage but there were already mumblings in the group of the legendary “Spelga Dam” climb. Some riders from Phoenix CC had bridged across bolstering numbers and keeping the average speed up. The group got quieter however as riders ticked off the kilometres then “Boom” it immediately splintered on the tight hairpins on the road up to the dam. Climbing in singles and in pairs the group fought their way up and over before the long, fast descent towards Bryansford. Holding a steady 50kph before turning at Ireland’s first ever mountain bike trail centre at Moneyscalp Forest to tackle the final climbs heading home. By this stage Mark Kane was having some trouble marshalling the troops but the occasional push here and there kept everyone together past the Legananny Dolmen then home to Dromara where the host club had laid on post event food.

Special thanks must be given to Dromara C.C. for organising this fantastic event. It was only the previous weekend that they ran the mountain bike event at the WPFGs, which is credited as being one of the best WPFG cycling events to date. Also well done to the North Down touring team who battled round the various course in conditions that were less than perfect. They can use their commemorative key rings with pride!