The Tour of Ards has been an early season fixture on the Ulster and Irish road racing calendar for almost 50 years. The 2018 race was held last Saturday in almost perfect weather conditions, producing a glorious Spring Classic spectacle. At nearly 90 miles, including three ascents of the gnarly Mountain Road near Portaferry, by any standard this is a tough race and the 78 high-class competitors averaged an impressive 26mph over the route. 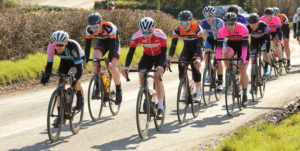 approximately 15 miles, with Stuart Henry and David Hamilton leading the charge for North Down Cycling Club (NDCC). At the first King of the Mountains checkpoint, this group had established an emphatic one minute eleven second advantage on the main bunch. This delighted the many NDCC supporters gathered there to enjoy the sunshine and cheer on the heros in “pink & black”.

With two men in the breakaway, the remaining NDCC team, Keith Phillips, Andrew Chivers, Timmy Burns, Nathan Keown and Shaun Carey, were pro-active in the peloton and stuck to the task of policing the all the attacks. After some long hard racing the gap narrowed to 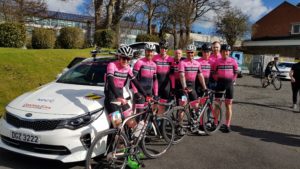 just 25 seconds at one stage, but it widened again in the final quarter as the breakaway sensed victory. The NDCC team all rode superbly with Stuart finishing as first A2 rider, Nathan the leading junior and fast finishing Shaun edging it in the bunch sprint. Team manager Stevie Cardy and mechanic Sam Carson did an excellent support job in the first outing of the Kia team car, generously sponsored by Downeys Newtownards.

Congratulations to Darnell Moore from Cardwell Cycles who took overall first place. Also to Ards Cycling Club, the PSNI, the sponsors and the many volunteers who made the day a tremendous success.

On Sunday, a large contingent from NDCC travelled to Coalisland to take part in the PJ Logan races. Star of the show was Rachel White who made little of the demanding, undulating course to take the laurels in the Girls Under 14 event. A great boost ahead of her upcoming ride for Ulster in the junior Tour of Scotland.

In the A3 race, Paul McArthur was his usual combative self, riding hard, closing down breaks 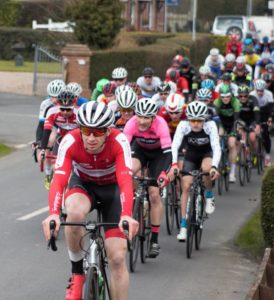 and stringing out the group with his own attacks. Paul won this event in the past as an A4, but the chequered flag eluded him this time. Another strong performance nonetheless. Tom Henry also rode extremely well in the A4 race, finishing “comfortably” in the bunch.

In the main event, three of the NDCC riders who had ridden the tough 90 mile Tour of Ards on Saturday, stepped up again for this mere 60 mile race! Whilst Timmy Burns was active in the A1 group, up the road Stuart Henry took up where he had left off on Saturday and along with two others established a break of over 1min.  Eventually they were 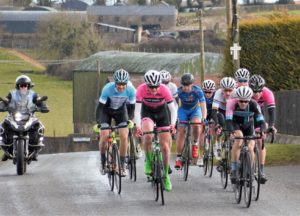 joined by another group which included Andrew Chivers and the winning break of 10 was established. Darragh McCarter (Donegal) attacked off the front to take overall victory, with an aggressive Andrew Chivers securing a well deserved 7th place, two positions in front of his teammate Stuart Henry.

Congratulations from NDCC to all the weekend’s winners and competitors.