Our own John Hunter took a break from his road season recently to make a return to his usual discipline of time trialing. John has been setting some fine times on the club Time Trail series so it’s good to see him taking the fight to the best in Ulster.   It was the  third and final Spires Trilogy TT and  took place on the Toome course. There was a good turnout of 31 cyclists on  what was a very windy night. The very strong Easterly tail wind on the outward leg saw some very fast times to the half way turn. It was a very different story on the way back with a real slog and difficulties getting even close to 20mph in sections. David McCann was the outright winner setting a very fast time for the conditions of 20:55 in what was a good training night for his Olympics later in the year.  John himself managed an excellent eighth place. A result he will rightfully be very proud of.

The club held it’s third 10 mile time trial of the season last Wednesday night. It was originally meant to be the second “25” of the season though road works on the Portaferry Road necessitated a last minute change. Credit to Eric for turning around the situation from what looked like a showstopper.

Conditions were similar to the previous weeks “10” resulting in similar times to the previous week’s event. Looking down through the results from the two weeks showed riders generally within a few seconds of their previous times. One discrepancy however was the time of Garth Beattie who inexplicably was 23 seconds slower over the same course from his time set only one week prior.

Louise Tognieri was the woman to beat on the night though with Alison McMullan taking another second place 14 seconds behind.

In the men’s event Matty took another first place with Robin Miller from Bikeworks coming in a distant second.

“Wee Wheels” Will Hamilton managed an impressive 5th at Banbridge in a sprint finish at the weekend. Good to see some of our juniors picking up some good results. Hopefully we’ll have a few more joining him before long. Molly and Ben will surely considering starting their careers in road racing soon.

It was not just the juniors racing at the weekend however. Saturday was the Bobby Crilly Classic hosted by Phoenix CC.
There was almost a full field in the A3 event with three laps of the circuit before the final long climb to the finish line at the summit of Divis Mountain. There was good attacking racing throughout the event but it was Stephen Harkens of Team Madigan who had enough left in the tank to take a well deserved win at the mast. Second place however went to Shane Farren which is a fantastic result in such a difficult race. Richard McCullough and Michael McMullan were also in the mix with Dan Brown representing the club for the first time in the A4 race. 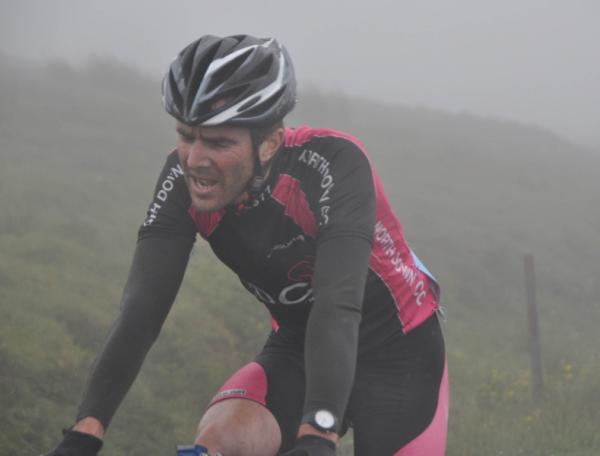 Shane Farren at the Divis Summit

These results should give our A3 riders great confidence for the Irish Road Race A3 Championships in August. Shane Farren in particular having some unfinished business in this race having finished just outside the top 3 in last year’s race.
Picture Courtesy of Marion Lamb