The  Ras Dhun na ngall 2015 took place over the weekend of 5 – 7 June, with 4 North Down riders in the 180 strong field going to the start line. Will Hamilton and Joash Lawrence were selected to ride for the Cycling Ulster junior team while Chris Hunter and Andrew Chivers were riding in the pink and black. 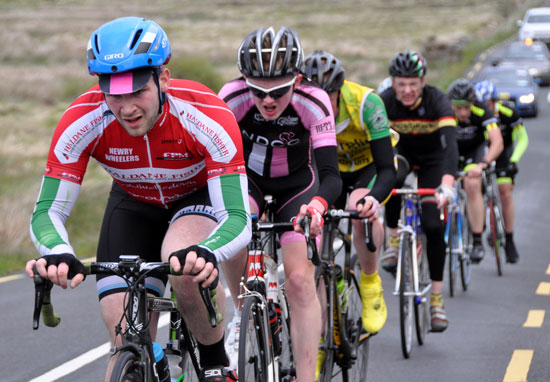 This 3 day race hosted by Four Masters CC is a very challenging event and the organisers have claimed that this years race was one of the toughest in its 25 year history with wind speeds recorded at 55 km/h over the weekend. One of the pre-race favourites was a Danish rider, Mikkel Honore, who is one of the top young riders in Europe.

Friday’s opening stage was a 32 mile sprint with 2 KoM. Chris got in to an early break but the strong winds made it difficult and they were brought back by the peloton. On the last descent with speeds touching 60 mph, Honore made his move and stayed away to win the stage by 19 sec ahead of the main peloton which contained Chris and Will. Joash and Andrew were held up by a crash and had strong rides to finish the stage. 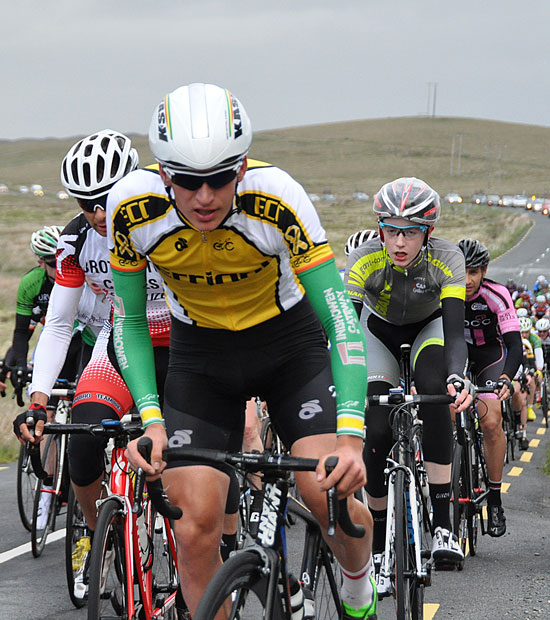 Saturday morning’s stage 2 was a 1.8 mile time trial up the infamous Maghera Hill. This is a tough climb in the best of conditions but with a 40 mph head wind it was described by all the riders as “brutal”. Honore showed his class again by winning the stage.

Saturday afternoon’s 50 mile stage 3 took the riders north of the race HQ  Ardara and with 3 KoM including the Cat 2 Corkscrew Hill this would be a good test for the riders. The strong winds had not abated and caused a few crashes. Unfortunately Chris was brought down resulting in a broken wheel and gear shifter which restricted him to only one gear for the rest of the stage but with great team work by Andrew he managed to finish the stage. Will and Joash had impressive rides and were certainly justifying their Cycling Ulster selection to finish a few minutes down on the flying Dane who had soloed home to win the stage. With a new shifter required for Chris’s bike, it certainly kept the support crew, Barry and Noel, busy on Saturday evening!

Sunday afternoon’s stage 4 was a 60 mile double loop south of Ardara with 4 KoM and a mountain top finish on Glengesh. With ramps of 20%, this was tough finish to a great stage race. All 4 riders had a fantastic race and were in the yellow jersey group up Glengesh Pass to finish just behind the winner. Mikkel Honore retained the yellow jersey to win the Ras Donegal 2015. 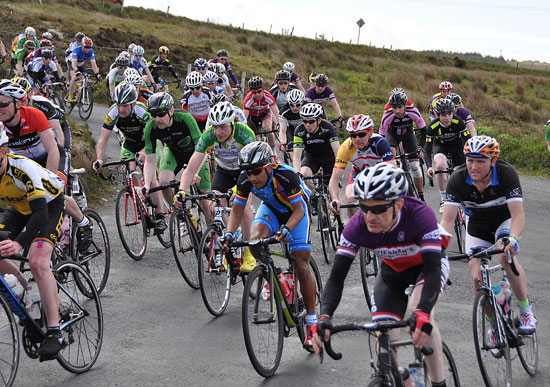 The Cycling Ulster Juniors finished 3rd in the team competition, a great result! All the North Down  lads rode impressively and can be rightfully proud of their efforts over the weekend. Chapeau!