The big cycling news at the weekend was the Track event based at Sundrive Road in Dublin. This was the first time that Dublin had held a UCI ranked track event for 50 years so there was big excitement with riders from all over the world participating in the hope of gaining some precious UCI points.

Rachel Mitchell was there representing the club mixing a very successful season on the road with some aggressive track racing too. Readers may note that Rachel has already picked up her share of trophies this year racing alongside Janine McNally and the rest of our successful racing ladies team. Winning the PJ Logan Cup, at The Bush, and a second place at Bartlin’s Bay may seem like a fine season to some but Rachel’s talent lies not only in her speed but her range and depth of abilities. 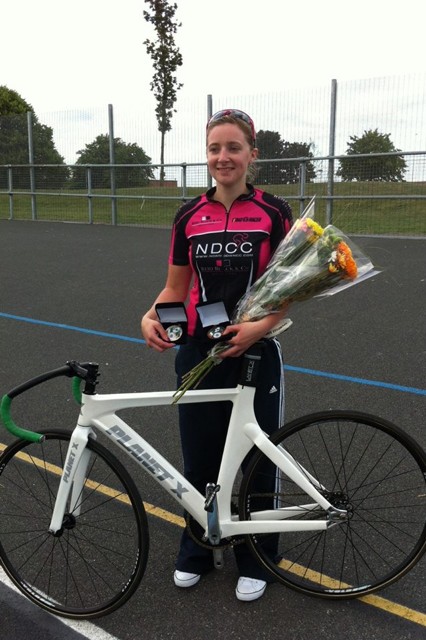 Club members who may not know Rachel may be familiar with her father, Anthony. Famous for his organisational ability he is the steadying hand at the helm of the Tour of the North and is currently using his talents to organise the cycling events of the WPFGs. Anthony also manages the coaching sessions at Orangefield Track, East Belfast, which has undoubtedly contributed to Rachel’s raw speed and professionalism on the track.

Fortunately for everyone involved, since it’s an outdoor track, it was a glorious day at Sundrive with a strong foreign contingent adding an international flavour to the day.

Despite only deciding to compete at the last minute, Rachel entered herself for a number of events, which, in hindsight, may have cost her in her better events. Out of races she entered it was the Women’s Keirin and the Women’s Sprint where she truly excelled however.

Track fans will be familiar with the peculiarities of the Keiran event, being started behind a “derny” (man on a small motorbike) which “paces” the riders up to speed until a lap and a half before the finish before pulling over and letting the riders battle it out for the finish line. Speeds are high in this race with the “derny” bringing the girls up to 50kph before unleashing them for the finish line. In this event Rachel managed a fine third behind Dutch rider, Melanie Klement and Dublin based track rider, Sarah Gunn. What makes her fine result even more magnificent is the fact that the Dutch girl who narrowly beat her is a full time rider on the Dutch Under 23 squad.

Next up for our athlete was the Sprint. This event was the culmination of many heats narrowing the field down to the fastest two over the course of the day. In the Sprint final it came down to Rachel and her nemesis, Dutch rider Melanie Klement again. The two girls raced head to head, “mano a mano” for two laps absolutely flat out on the track. On the finish line it was Dutch girl narrowly taking gold with Rachel taking a magnificent silver medal as testament to her day’s work.

Everyone at North Down CC would like to congratulate Rachel on these fantastic achievements racing an international field at a UCI event. 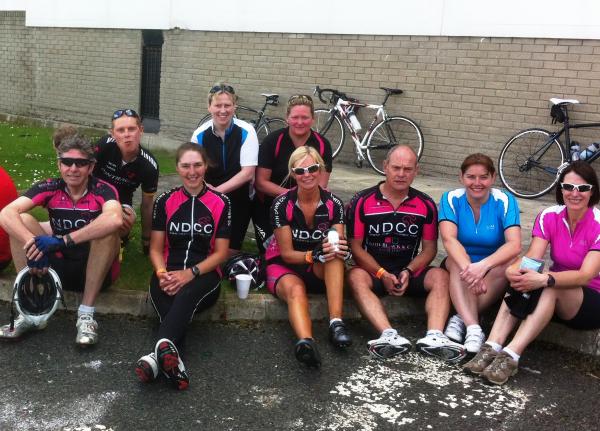 Hidden away from all the glamour of elite racers, sprinters and time triallists at North Down Cycling Club there exists a small (but perfectly formed) body of cyclists who dedicate themselves to participating in the annual sportives that form part of the Touring Calendar from late February to October.

The sportives are generally organised events, catering for the mass participation of cyclists round a predetermined route, over distances usually between 30 and 80 miles. Usually the idea is to raise money for a particular charity whilst allowing cyclists to enjoy a day out with like-minded people on some of Ireland’s most scenic roads.

The NDCC Touring Section as they are known, have this year participated in quite a few these events, ranging from the Dromara Coastal to the Tour of the Orchard County with the odd foray “down south” to the likes of Connemara.

Last weekend 12 North Down men and women took to the start line at Larne Leisure centre for the “Making A Difference” sportive, a cycle of approximately 60 miles from Larne to Cushendun and back along the scenic Antrim coast road.

For once the weather was kind and although there was something of an unpredictable wind which was either in their favour or blowing in their faces, our hardy group, decked out in the North Down pink and black livery made good progress round the headland’s and bays, that combine to make the Antrim coast so famous a scenic route.

Aside from a traffic jam in the narrow streets of Cushendall, they arrived in Cushendun in a respectable time, to be directed to an old stately house and exquisitely manicured lawn. After drinks (Pimms?) and a snack our touring team were raring to go and ready to tick off the remaining miles.

It was suggested that they might return via Glenariff Forest Park and with map at the ready they set off again, the warm weather and coastal scenery combining to keep spirits up.

The road to Glenariff was simple enough with a smooth road, steady incline and some Glens scenery adding to the “bon vivant” feeling. Somewhere up in the hills, due to some rather errant map reading, the map became useless and they found themselves climbing some very steeply ramped roads as they crossed the Antrim plateau from the Broughshane direction towards Larne. Anyone familiar with these roads knows they sap any strength left remaining in the legs making for a hard day out.

Finally they arrived back at the finish at Larne Leisure for even more snacks, drinks and the ubiquitous group photo. Apparently the all lady quartet of North Down Ladies had wisely stuck to the coast road and they all made it back to the finish in high spirits.

Well done to all the North Down Touring Section, a good day made all the better by some glorious sunshine, fantastic scenery, a few murderous hills and some great camaraderie.