Started in 1987 Noel McKinley originally organised, sponsored and competed in the race. The race has always been very popular and is a great stepping stone for riders of the future. Many past winners have gone onto take bigger wins in their careers and quite a few have turned professional.

The action kicked off on Friday night in Warrenpoint with a 44 mile stage.The race took in 3 laps of the carriageway before tackling Grinan Hill then the boys charged into Warrenpoint completing 3 laps of the old circuit before finishing outside the police station. On the night it came down to a bunch sprint with Matty Blayney just being pipped at the post and having to make do with second. This meant that three riders were to go into the time trial on equal time in the GC. It didn’t go all Matty’s way that night though with breaks getting away with Richard McCullough getting away in on the action before they were reeled in prior to the finish. 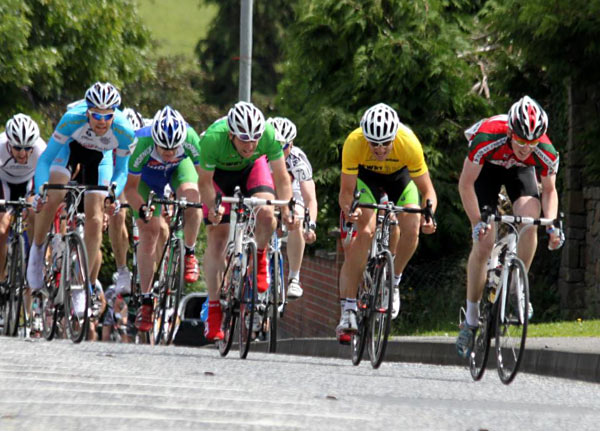 Saturday morning started with the TT now taking place in the morning starting at Hilltown then heading towards Reed hall. The team rode a good Time Trial limiting their losses to the more experienced testers.The wise heads of the club rode a conservative Time Trial saving their energy for when the team would need it.  In order to keep Matty in  contention with the GC and the Green Points jersey the boys knew they still had a job of work to do…..

The afternoon was then the Queen Stage of the race. A 55 mile stage taking in 3 laps of the Hilltown/Kilcoo/Rathfriland circuit before heading to Rostrevor via Reed Hall and then back towards Hilltown on the Newtown road which are both category 1 climbs. At the crossroads the race  swung right and took in the gruelling Spelga dam climb finishing at the car park at the top.

The boys worked hard through the stage and with the break being gradually reeled in managed to get Matty a top ten stage finish. The day’s work was enough for Matty to take the Green Points jersey which he would take into the final day. But could he and his battle hardened team defend it? Stage racing makes different demands on riders with some riders reacting differently to others after two or three days racing. Pressure was on for the North Down men to deliver day in day out. The final stage had “lead out” written all over and with intermediate sprints to contest for points along the stage then Matty would need a strong team firing on all cylinders to overcome the opposition. Could the North Down “postmen” deliver time and time again?

Sunday’s final stage was a stiff 65 miler of lumpy roads round the Mournes with the finish in Newry.

Matt Blayney put in a great ride right from the opening stages. He went into the final leg wearing the green points jersey and set about defending that by taking the second intermediate sprint from his rival for that classification, Newry’s Drew McKinley. Once the break of the day was reeled in then the boys set about setting Matty up for the finish line sprint.  This was no easy task though as the boys from Newry had stolen the initiative from the North Down men. Sensing danger Paul Ferguson used his experience to bring Matty back into the game. Dragging him up and onto the fast train from Newry allowed The Prince to latch onto the finish line express. He dutifully won the stage in convincing style closing out the competition for the Green Sprint Jersey.

This also gives Matty enough points now to qualify for an A1 license allowing him to compete amongst the very best riders in Ireland.

The first Ulster time trial title of 2012 was awarded on Sunday when Maryland Wheelers promoted the 50 miles distance on the Woodgreen circuit. North Down was, as ever, in the thick of the action with three testers representing the club. While John Hunter and Brian Simpson both put in excellent times it was Declan McMackin who really made his mark. After an excellent ride the previous week at the Irish Time Trial Championships he raised his game another notch by taking the best unplaced vet.

Meanwhile down at Dunmore Mountain Martin Grimley and his team at Dromara CC were hosting the latest round of the Ulster Mountain Bike Series. A tough course as always though was made a little more demanding this year with the heavy rain making the climbs very slippery punishing the inexperienced rider with having to get off and push. The famous rock slab drop and S descent were included again this year to spice up the race though with such treacherous conditions choosing the wrong line could lead to  serious consequences. Roger Aiken won the event in a convincing manner from Matthew Adair making it a classy 1-2 for Banbridge CC with Ciara MacManus from Summit Mountain Biking taking the ladies race honours by a imperious 21 minutes. 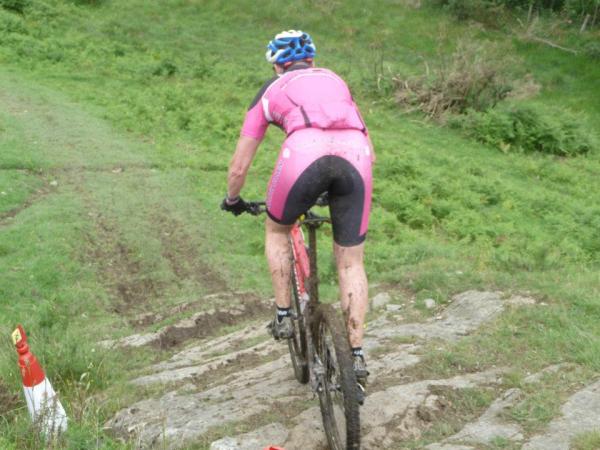 Athlone Triathlon
As ever it’s not just our men setting the pace for North Down. Louise Togneri has been in action down in Athlone competing in her usual discipline of triathlon.  Finishing third in her age group has meant that she has qualified for the World Championships in London representing Ireland.  An absolutely fantastic achievement with everyone at North Down wishing her well for the World Championships.