This weekend saw the country’s top A2 and A3 cyclists head to Newry and Mourne for the Newry 3 day promoted by Newry Wheelers. The race, in its 26th year, had a full field and with some great racing guaranteed over 4 stages over 3 days around some of Ireland’s most beautiful countryside. As ever North Down was in the thick of the action fielding a strong team of four. Shane Farren, Paul Ferguson, Michael McMullan and the venerable Noel Boyce were there to test their form.

Friday night kicked off with a 40 mile road stage starting and finishing at St. Marks High school, the riders tackling 35 flat miles until they hit the Grinan Road climb. The lads were riding hard moving up to the front of the peloton to ensure a good position for the final dash down into the finish at Warrenpoint. Paul unfortunately unshipped his chain at this point losing a couple of minutes and any chance of a GC position. The rest of the lads finished strongly however finishing well up the bunch. Local rider, Ian Ingles, took the stage setting him up nicely for Saturday morning’s Time Trial. 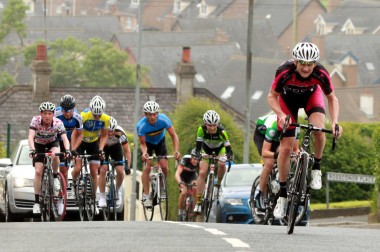 Ian continued to consolidate his hold on the race during the 2.5 mile time trial running from Hilltown to Rathfriland with the North Down team riding strongly to maintain their hard fought GC positions.

Saturday’s afternoon stage was to be a 55 mile race taking in the hillier roads round the Mournes. As predicted by our team earlier in the day a break got away early in the race with Paul bridging up to them and taking maximum points in the Green Jersey competition. The break stayed away for most of the race enabling Paul to keep gobbling up more points at every opportunity and even a few King of the Mountain points for his trouble! While beached buses were a problem for the first stage of the Tour de France, parked cattle trucks were playing havoc with the points finishes of the Newry Wheelers run event, with the sprint moved 25 metres because of a narrowing of the road due to the trucks. It didn’t deter North Down’s Paul Ferguson who took both sprints confidently.

Paul had done enough work by this stage dropping back to the bunch with Daniel Stewart taking the yellow jersey from the shoulders of Ian Ingles.

Coming into Sunday’s stage it was clear that Micahel McMullan was leading the GC charge by the club with Paul looking good for the sprinter’s jersey. This was to mean a hard morning’s graft for the boys with a race to control and hopefully pull the overall GC in the direction of our determined men.

The lads all worked hard to control the race as best they could but a small group managed to get off the front taking all the available points at the first primes.

Over the climb into Castlewellan and on to the 1st ascent of Rathfriland the gap had come down to about a minute and on the run back to Newry for the first time the bunch stalled and it’s here that Paul made a split second decision to try and bridge across to the break. The King of the Hills leader and eventual winner of that competition Brian McCardle of Orwell wheelers went with him plus a few others making a select team of chasing riders.

The break was caught just before the climb of the Seven Bends with McCardle taking the points.

The then Points competition leader Ian Inglis then came across to join the party on the run from Hilltown to the 2nd ascent of Rathfriland.

As soon as he made the bridge Paul attacked over the climb taking maximum KOH points but was unable to stay away due to a fierce headwind hampering his progress.

enabling him to take a convincing win from the break which conveniently gave him enough points to snatch the Green Points jersey too.

Michael McMullan finished strongly taking 23 rd overall in the race with Shane and Noel coming in closely behind having done more than enough work for the club to take 2nd team overall too!

Over the weekend the points jersey wasn’t the only one being contested with an equally hotly contested “pints” jersey up for grabs. Matty Blayney’s stag weekend coincided with the Dublin Maracycle and a team of club members and friends rode the trip to Dublin and back to celebrate. Uncle Ian Blayney provided support, driving the club bus, which miraculously survived the trip this time. 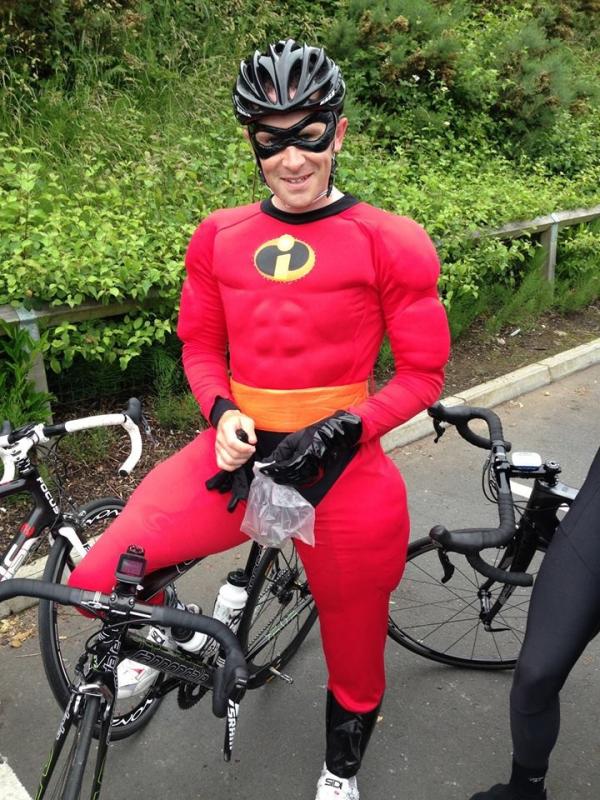