After a very mild autumn that saw temperatures higher than during the summer and cycling conditions in November better than they were in July, it is clear now that winter has well and truly arrived. That means a number of things, the heavy but trusty winter bike being lifted off the wall in the garage, given a dusting with an oily rag, pumping the tyres to no more than 90psi and then looking out the window and saying “Don’t want to get my winter gear wet, I’ll try again tomorrow”, to hunting out the turbo trainer with the thought of putting on Saving Private Ryan and spinning for three hours in the dry and heat.

In all seriousness, if you have not had your winter bike serviced since last year, there are a number of very experienced mechanics close by who will do a first class job without breaking the bank, especially friend of the club Brownfield Bike Repairs and Restorations, club sponsor Chain Reaction or the newly opened Bike House part owned by club member Mark Irvine.   A few essentials are good working front and rear lights, mudguards and proper winter tyres. SeeSense lights are a local company, Marketing Manager Ross Blayney is a long time member of the club, that have made a revolutionary intelligent light that senses the environment around you. This would make a great Christmas present and if you buy direct, you get club discount – what could be better!! Keep a tin of WD40 handy in the garage and clean your bike after every wet or muddy run out to make sure it ticks along trouble free.

Many of us buy a turbo trainer thinking it is an alternative to the Saturday morning run if the weather is bad, so if you think you’re going to stick on that DVD and just idle the hours away on your turbo trainer, then think again!! A much better use for turbo trainers are specific training programmes that last no more than an hour. More commonly known as interval training, these give you more ‘bang for your buck’ by using your heart or power thresholds more efficiently and increases your bodies’ tolerance of the athletes’ enemy, lactate acid. Programmes such as Winter Pyramids, Russian Steps and Micro Bursts are but a few of the many exercises you can do on one. You might even like them!!

The club’s annual Hot Port run is scheduled for Saturday 12th December. This year will see a return to the Saltwater Brig, which is located between Portaferry and Kircubbin. There will be a number of rides to suit all abilities with the aim to arrive at 1130am. Please refer to the club Facebook page for further details.

Foyle CC hosted Round 8 of the Ulster Cyclocross League in a brand new venue, St Columbs Park.   Sitting resplendent on the banks of the River Foyle, it gave a fabulous backdrop to the course despite the atrocious weather conditions. Five NDCC riders made their way up to L’Derry to give support to Foyle CC, in what was their first ever cyclocross event.   The course was very challenging, technical in parts, fast and flowing in other sections ensured there was a bit of something for every rider. 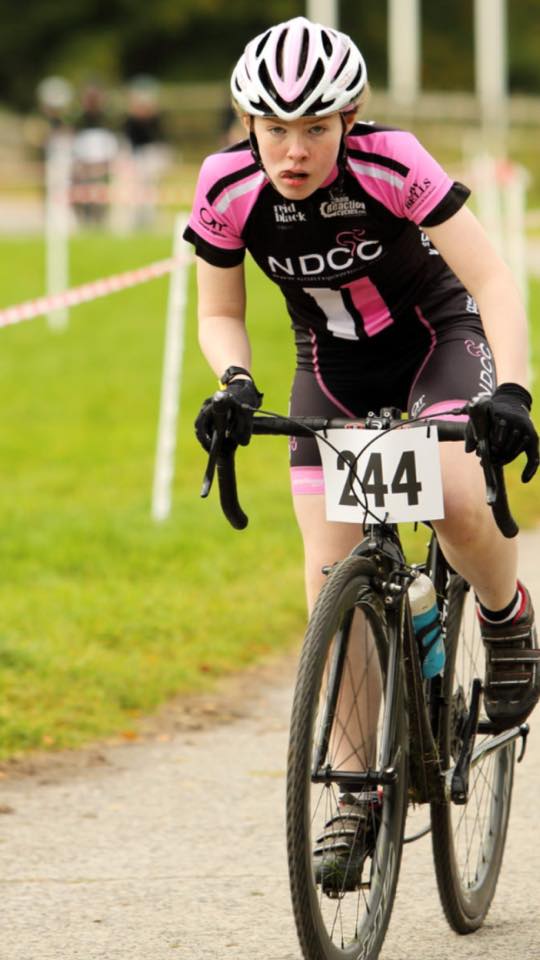 Maia Simmons who is currently leading the Under 14 Female catagory by 63 points on way to victory at the Round 8 of the Ulster Cyclo-cross series in St. Columb’s Park.

In the youth category, Maia Simmons continued her dominance in the U14s with an eighth win, completing destroying her competition by finishing over two minutes ahead of her nearest rival. If you compare some of her lap times to more senior riders, she would have been sitting comfortably behind riders much older than her. This girl is very much a rising star in the club.   Jake Rushby faired much better this week, and stayed puncture free. Riding in a tough and fiercely competitive U16 category, Rushby junior has been holding his own and finished a commendable sixth in his race, well ahead of his closest competitor.

In the senior races, Alison McMullan raced strongly in the women’s mountain bike race to finish yet again on the podium, with a third place. Michael McMullan and Keith Freel rode the CX B race, with McMullan riding hard finishing 5th, whilst a great performance from Freel had him coming in 22nd, hopefully that means he will be gridded for the final round at Falls Park, Belfast, next Sunday. Well done to all who braved the elements and traveled that distance to represent the club. Foyle CC were very grateful that we did.

NDCC would like to congratulate Dany Blondeel of the Belgian Project for recently winning this accolade. Dany’s love of cycling is known throughout the country, his aim to send talented young cyclists to Belgium and experience life on the continent as an aspiring professional. The success of the Project is down to his hard work, dedication and enthusiasm for the growth of the sport in Ireland and has seen several ‘graduates’ of the Project move up to the next level. Dany is a very deserved winner.