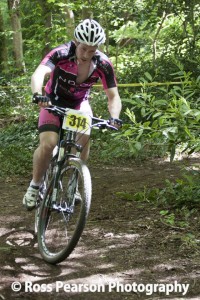 The first race of the 2014 Ulster Cross Country MTB series took place on Sunday 9th March at the NI MTB jewel of the crown – Kilbroney, Rostrevor. The race was being held as part of the 2014 Rostrevor MTB festival with both downhill and cross country events taking place, creating a great buzz around the magical Kilbroney surroundings.

The last time I was at Rostrevor, I managed to hit a tree at 20mph trying to keep up with one of those Blayney chaps. No such foolishness was going to take place today. I knew my limits, had a strategy in place and had even negotiated extra time away from the wife and kids for an early start and hence get an eagle eyed practice lap in the bag. Bar a mechanical there was no stopping my plan to take a coveted top 10 in UXC, S3, Round 1.

S3 had attracted the biggest field of the day with almost 60 eager riders lining up at the start line at the caravan park. The fast boys (S2) had been let loose a couple of minutes ahead of us with the really really fast boys (S1) set off before them. The eventual S3 starting whistle brought back the excitement of the argy bargy MTB XC shenanigans as a crowd of grown men on bicycles let their inner natural Neanderthal instincts take over and fought bravely to get ahead. I managed to hold my own with the starting challenge and gradually moved from the middle of the grid toward the front 10. One of Rostrevor’s defining features is the steep initial climb, affectionately known on strava as quite simply “THE HILL”. To my mind there isn’t a more apt description. Think Church road, Holywood on fire road gravel, with lots of trees around you and you get an idea of the conquest ahead. Tis quite a funny spectacle, I’m sure, to be watching hoards of hairy MTBers grimacing through the pain whilst travelling at various speeds, but rarely exceeding the 6mph mark. After the seemingly never ending initial hill horror there was a welcome left turn into the rocky ‘horse trail’ single track. Under normal circumstances navigating through this trail would be relatively easy, but after the lactic acid build up from the climb, riders were making mistakes all over the place. I managed to make my way past a couple more riders and slotted in behind a competent rider I knew who would take good lines giving me some time to rest the mind as I followed along. The horse trail eventually led onto a steep descent where my companion and I lost our places to a rider who seemed to have no fear of ruts, roots nor rocks as he flew past us at high speed. Oh, but to have such technical ability and lack of risk aversion! The remaining part of the course took us through a mixture of tree touring, where keeping traction was always a challenge, and then some fast single track where you were given some respite and could breathe a sigh of relief as the heart rate moved back towards a more manageable level.

Come lap 3 I was battling hard with a couple of riders and the mental battle was also beginning to commence with my angel and devil shoulder companions both doing their best to lift me up and bring me down respectively. Unfortunately the little red pitchforked fella was beginning to make ground with observations and questions such as: “Of course you are slowing down. What do you expect when you spent half your winter days sitting watching Breaking Bad/The Wire/Rome on the warm comfort of the sofa instead of being out there building your base”. True true little fella, but sure look at the amount of rain we’ve had these last few months, eh? Surely all those other MTB boyos were also wrapped up warm in their onesies indulging in the modern day escape that is TV? “Not true, you lazy XXXX. Look at Johnny Reid out every night blitzing those Cairnwood hill climbs like they were North Down peninsula time trials”. And so the imaginary conversation went on until I finally got past a couple of riders who had been exchanging places with me over lap 2. With mini Satan finally knocked off his pedestal (and rode over with my 29″ wheels) I began to again focus positively on the task at hand. I managed to spot and take a slight short-cut that no-one else appeared to be using, cutting through the trees to shave a few precious seconds off the lap time.  I found it strange that everyone else was sticking to the well-trodden path and analogous to the guilty pleasure of taking a strava kom on a path shared with pedestrians, it felt kind of wrong, but I knew it was legal! As I approached the last third of the final lap, I was sitting in 7th place and felt I still had some glycogen stores left to burn in the tank. I pushed on past a couple of S2 riders, but couldn’t get sight of the S3 riders ahead of me and eventually crossed the line coming in a respectable 7th. A great opening round course, superbly organised by Dromara Cycling Club.

All in all there were 4 NDCC MTB warriors in action at Rostrevor which was great to see. Johnny Reid, who has been showing great form in the Ormeau early season events, was unlucky to (again!) snap a chain whilst leading S2. Andrew McCullough is on an upward trajectory to his great potential, finishing in a great 7th in S2. Shaun Carey, who is relatively new to MTB, put in a solid performance in S3.

No drugs were consumed during this race (obviously) nor the writing of the above report (not so obvious).