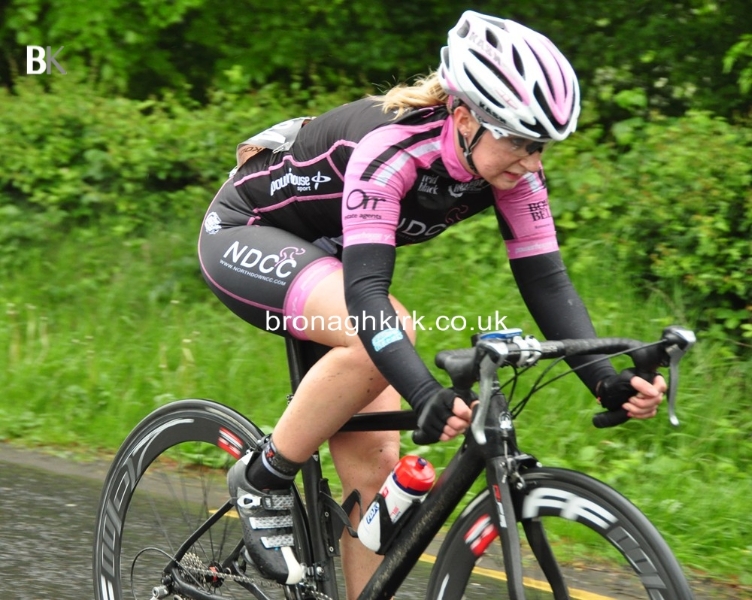 A field of over 30 lined up for the 3rd round in the series, held over 3 laps of a 24km circuit around the testing Emyvale-Monaghan-Glasslough circuit.

The event was held in mostly rainy conditions, with the roads only beginning to dry for the finish of the Women`s race.

A go-from-the-gun approach was adopted by Fintona`s Rachael Withers (West Tyrone Velo) who was making a belated start to her 2014 season, but the field which included some full timers including National Champion Mel Spath, were in no mood to give escapers a free hand, and the move soon came to nothing.

Riders were dropped from midway round the first lap, and a crash 100 metres after the finish line on lap one brought down at least 5 riders, with one requiring hospital attention. Luckily the main contenders at the front, including Mitchell, were unaffected and carried on with speeds reaching in excess of 30mph on the flat sections of the course.

The high pace was constant throughout the remaining two laps, with some lone riders attempting to break away, however no moves gained more than 30 seconds advantage on the lead group.

Roisin Kennedy (Adamstown CC) tried constant attacks in the closing 5km, but all were reeled in by the hard-charging 15 leaders, and as they entered the final corner in Emyvale village with 500metres remaining, it was all set for a grandstand finish.

True to form Irish Champion Spath – who in recent weeks has switched from her Dutch based squad to the English `Windy Milla` outfit, took the verdict in a close finish with Mitchell, recovering from the mega-miles in Majorca, coming in 7th, thus adding to her extensive list of top 10 finishes in both Ulster and National events so far in 2014.

Result. Round 3 of the Joe Daly Cycles Women`s National Series. 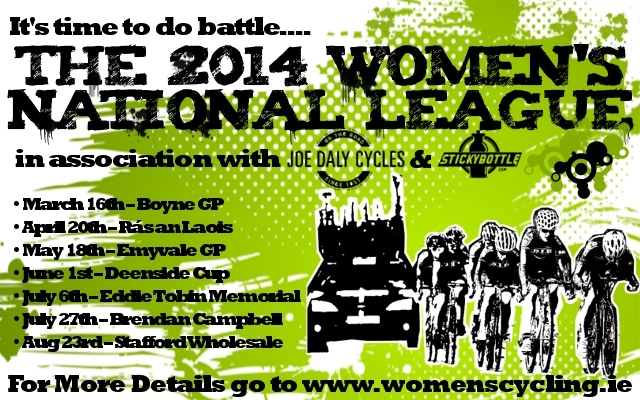