As most of you are aware, NDCC is not just about the `racing men’. We have a diverse range of cyclists within our club and so to highlight this we would invite members to submit a short article about something they’ve done that is cycling related that they are proud of, or that they feel is of interest. Please try and include a picture if you can. If you would like to submit an article please email it to me: deniseohart@yahoo.co.uk.

Our first member profile is from Dawn Henley who completed a 400 mile ride in the States last year to raise money for the families of the servicemen and women who died on 9/11. 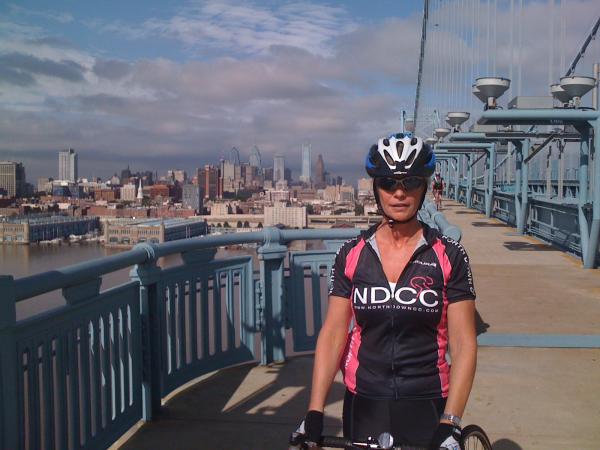 Dawn says “I began cycling 7 years ago as a way of getting out in the fresh air, and also as a form of exercise that doesn’t put too much pressure on the old joints, unless of course you take a tumble! It was also a way of exercising without having to depend on others. However, having now joined NDCC it is great fun to be pushed and tested along with others to help you along…usually with a smile!! I get a buzz from the endorphins that are released through the exercise and find I have more energy to get mundane everyday stuff done after!! It most definitely has a positive effect on me from an emotional and physical perspective, and more recently from a social one too.

Last year I took part in a cycle ride in the States. The cycle takes place every year in memory of those who died in the line of duty on 9/11. The route either leaves or finishes at Ground Zero, New York. We left from Ground Zero, New York, to New Jersey, Atlantic City and finished in Washington at the Pentagon. 250 guys and gals took part with 200 support staff! The first day we covered around 105 miles and each day after that was similar. Not sure about the total mileage as there was a security alert over the whole thing due to so many service personnel being there and we were rerouted after the first day. We were also diverted due to debris on the road as a result of Hurricane Irene. It was meant to be about 400 miles in 4 days but I was given a bike with no speedometer so I’m not sure what we did in total in the end. Felt like 1000 in the heat though!!!

It was tough going but there was tremendous support and plenty of refreshment stops for drinks and energy gels and bars. The public support was fabulous and they lined the streets to wave us on and there was a ‘blues and twos’ escort into and out of the cities. Some of those taking part either survived the tragedy or knew someone who hadn’t. They were all emergency personnel and the funds raised go to the families of those who have lost their lives in the line of duty. A number of the PSNI usually do the cycle and this year some of the funds were returned here to the widow of a PSNI member. I was very proud of my achievement for such a worthy cause. Also, not bad going for a gal at 50! My attitude is to do what you can when you can and push yourself to achieve. You are a long time dead or in a nursing home and it would be nice to have good memories of more active days. I look forward to many more years cycling with NDCC.”