Forget Wiggo and Cav! The one name that stands out in North Down in 2012 is Matty Blayney. Matty is having a ‘stormer’ of a season and his fantastic ride in the Newry Three Day has assured him of promotion to the top flight of Irish Cycling as an A1 rider.

Yet Matty’s performances this season have not come as a surprise to those who have been following the local scene in recent years. Matty is the son of club stalwart Eric Blayney and as such was introduced to cycling at an early age. Indeed, his first competitive race was at the grand old age of 7, when he competed in the Castle Park mountain bike league, which was promoted by his father. 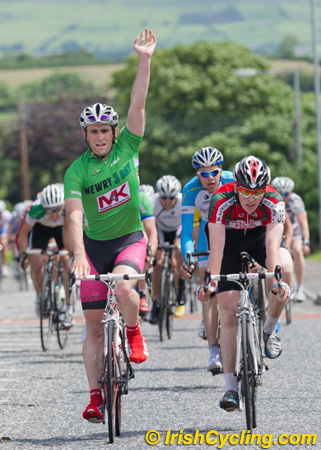 This was the catalyst for great successes. For example, he went on to win the Northern Ireland MTB championships at U14 level (twice), at U16 level and even the Scottish MTB championships! As early as 1998 Matty was voted the North Down Cycling Club’s most valuable rider. In the same year he won the North Down Borough Council’s Sports Personality of the Year!

However, even then Matty’s potential on the road was also much in evidence and as a 16 year old he was selected, along with Ryan Connor, to represent Northern Ireland at the Manchester Youth Games. Here Matty came in 11th behind the man who came 12th in the Vuelta de Espana, Nicholas Roche.

Many of Matty’s contemporaries of this era went on to great success at, for example in the Commonwealth Games or in the continental professional scene, but unfortunately Matty was to be robbed of many successes when he fell victim to glandular fever and couldn’t ride seriously again for 7 years. During this period he did attempt comebacks, but through injury and illness he was never able to recapture the talent that he exhibited as a young teenager.

However, in 2007 his cycling career was rescued when his good friend Duane McCreadie asked him to be part of a team competing in the Trans Rockies MTB race, in Canada. Although primarily a fund-raising exercise for the Clic Sargent charity, this was an extremely arduous event and one that required an enormous amount of training and preparation. The positive aspect of the venture was that it provided the talented Bangor lads with a real focus. Through completing the event Matty and Duane raised almost £5,000 for the charity, but perhaps more importantly it re-ignited a sleeping giant.

Initially Matty began picking up successes in North Down club events, where his scintillating sprint was put to good effect. His first success in open events came in 2010 when he won the Paris – Katesbridge and stage 1 of the Loughguil Three Day, both in sprint finishes. He even won the North Down Cycling Club’s most valuable rider award, 12 years after he first won it! Even though his 2011 season was hampered somewhat by illness and injury he continued to win club events and pick up points in open races. It was obvious to everyone that it would not be long before Matty would move from A3 to A2 status in the Cycling Ireland rankings.

As 2012 began it was clear that Matty was in the form of his life. A hard winter’s preparation saw him brimming over with confidence and almost a stone lighter than at the end of the 2011 season!

At Easter he travelled to Dublin to take part in one of the most prestigious stage races in the country, the Dublin – Gorey Three Day. From the ‘off ‘ he turned his new found fitness into results taking second place from 150 others in a mass sprint. He followed this with a 3rd place on stage four and 4th place overall – 3 seconds behind the winner and 2nd in the points competition!

In all the club races and local races he was a real force to be reckoned with. In the Phoenix GP, for instance, he annihilated the opposition to win the bunch sprint in the A3 event. However, he was no longer simply reliant on his sprint. Matty was now the complete roadman. He could climb, time trial and of course sprint. Nowhere was his all round ability more obvious than in the Donegal Three Day, where he was aggressive throughout, instigating all the important moves. With this forceful style of racing Matty was accumulating points in the rankings and quickly moved from A3 to A2 status.

Yet, like all top class athletes, Matty was not prepared to rest on his laurels. The A2 status may have been daunting for some, but not him. In the Tour of the Mournes the pink and black rider was always at the front and in the 4 up sprint, after a 40-mile break, he again took the chequered flag. In club races he continued to set the standard and in open races he gathered the points that would be needed if he were to attain the elusive A1 status.

The climax in his quest for points came in the recent Newry Three Day. On the first stage he won the mass bunch sprint for 2nd place and on stage 4 he went one better, not only winning the stage but also taking the coveted points jersey and the necessary points to ensure A1 status!

Perhaps what speaks most forcibly about Matty is the esteem in which he is held both on and off the bike. Matty would be the first to acknowledge that his success in moving from A3 to A1 in record breaking time was greatly helped by the assistance of other hard working North Down team members. Yet such support comes as a result of mutual respect. Indeed, this respect is evident outside the North Down ranks. Drew McKinley of the Newry Wheelers recently commented: ‘Matty is a gutsy, honest classy bike rider who is not afraid to have a go.’ Perhaps even more importantly, Drew went on to say: ‘… on and off the bike he is a gentleman…’ What more fitting epitaph could any athlete have? Matty certainly has the ability to be an accomplished rider at the very highest level and the attitude to gain the admiration of all. Everyone in North Down wishes him every success.

Missing in action veteran returned to terrorise the Vet’s Run again last week. Des McCoy has been spotted back on the bike. Somebody better tell them to ramp up rhubarb tart production down in Ballywalter again.

Another rider who’ll be off the bike for a week or two is Paul Ferguson. All at North Down wish him a speedy return to cycling and a strong comeback. Hopefully now he’ll be doing some serious damage with a second leg to pedal with!