You might be forgiven for thinking that North Down Cycling Club consists entirely of women road racers as they have been stealing the limelight for much of 2013. The weekend however saw our other significant division, the hardy touring section dust off their bikes and head of into the unknown.

The weekend saw the first big touring event of the year, the King’s Moss Sportive, and as ever we sent a large contingent of 18 riders. 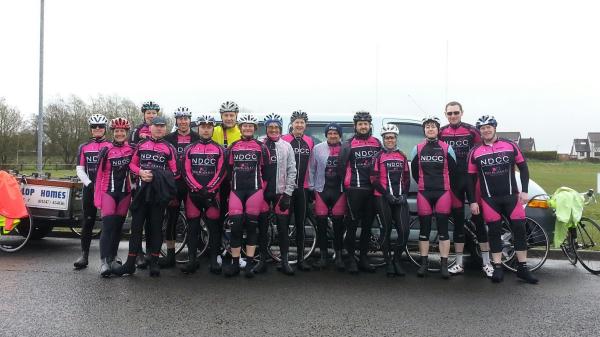 With support from Chain Reaction Cycles the sportive was held in support of the Northern Ireland Cancer Fund for Children raising much needed cash to help cancer care and support for children and parents.

Despite some signs of Spring during the week the conditions would have been charitably described as “changeable”. Wind, rain and grey skies met the riders though being a hardy bunch they battled round the 100km course, allowing participants to enjoy some of the most enjoyable and challenging roads in Antrim.

There was a good turn out from the other clubs too and the start was fairly quick. The North Down riders, ever the professionals, soon formed a cohesive group and were soon performing “up and overs” with everyone taking their turn on the front. The route was hilly enough but Lisles Hill Road proved to be the first very challenging climb of the day up to an elevation of 775 feet. However, they were rewarded with a cracking downhill ride into Glenarm and then along the coast road to the lunch stop. With a decent tail wind it made for great riding with fantastic views. Kings Moss always put on a great lunch stop and there was no end of lovely sandwiches, buns and cakes. The hungry riders ate their fill and then headed off for the second leg of the ride. It wasn’t long before they regretted the decision to eat so much as thus started a 7 mile climb up to an elevation of 1000ft from the Ballymullock Road up Shanes Hill Road. This climb was not helped by the fact that it was straight into a block head wind to the extent that they couldn’t even avail of the great downhill from Shanes Hill Road as the wind was so strong they had to pedal just to keep moving forward! From there the rest of the ride was undulating with a final downhill sweep back into the car park at the Rugby Club in Ballyclare.

As ever there was there were refreshments post ride allowing riders to catch up on their tales of steep climbs, tough headwinds and the joy of a damp soggy chamois post ride over a well deserved cup of hot tea.

It wasn’t just the tourists turn to open their season at the weekend. North Down sent a strong team to the Omagh Road to contest the first round of the popular time trial series.

It was a very difficult morning with a hard headwind out into a biting cold wind, before a fast blast home. Heavy traffic for the Cookstown 100 races meant a very difficult tricky to Marshall event, and traffic which caused a few issues, slowing riders, or assisting a few lucky ones, but thankfully everyone got home safely and happy.

On the day Paul Swenarton was the club fast man finishing in a blistering 23:07. Colin Massy wasn’t far behind though and John Hunter rode well managing to come in just ahead of a fast moving Louise Togneri. Louise is having a fantastic season thus far with results not only on the time trial bike but also on the road bike up and down the country. John will undoubtedly be pleased that his three weeks training in Majorca has given him that “marginal gain” advantage over Louise. However, with the form Lousie has been showing of late, he shouldn’t become too complacent.