Drum Manor Forest outside Cookstown was the venue for Round 7 of the Ulster Cyclo-cross series which also doubled up as the Ulster Cyclo-cross championships.  Host club Carn Wheelers were running their first cyclo-cross race and it was the first time that the club had used this forest for off-road racing.  The section of the forest used was well away from the popular public areas of the forest with the main action taking place is an open grass area which was on a slope making cycling difficult.  To add to the difficulty the club had set up a spiral section at the lower end of the field with the centrepiece of a scaffold bridge drawing the biggest number of spectators.  The course then weaved its way out of the field and into the fire road section of the forest.  There were plenty of features to keep the riders alert on each tough lap. 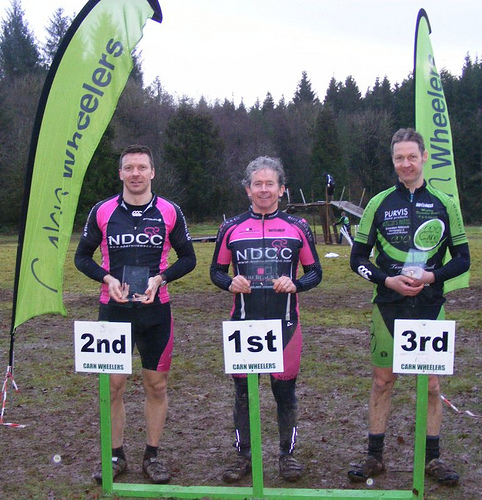 North Down fielded a smaller turnout than normal though a good cross section turned up to represent women, juniors and male riders.
Molly Mclarnon delivered again with yet another win in her girls category with a dominant four minute margin over second place finisher. It seems that Will Hamilton may have finally met his nemesis though. Having to settle for an unusual second this time round means that “Wee Wheels” will be putting in some good training over the winter to reclaim his place at the top of the podium next year.

The men’s race was a high pressure affair though. Through the weeks our riders have been filling the top five positions but as yet the riders have had to make do with bridesmaid duties while another club’s rider took the spoils. Las time out Colm looked like a win was guaranteed until bad luck dashed his hopes. How much longer would our elite team be dogged by misfortune?
Clearly Colm felt that “enough was enough” and set out to show that he fully deserves his “cross legend” title. Appropriately enough it was another North Down athlete who would be his closest competition with Barry Hamilton, more commonly known as “Will’s Da”, who pushed him all the way to the line. Finally “King Colm” took his maiden win with a winning margin of only 4 seconds over second placed Barry.

The ladies class was ably represented by Alison McMullan adding ‘cross to her range of skills after a great season contesting the club time trial series. It’s beginning to look like the depth of talent in the North Down Ladies section could make for a formidable force in the 2013 season….
MINCE PIE RIDE – Friday 28th

Following our 2 very successful Hot Port Runs we are now planning for our annual MINCE PIE RIDE!!
It will take place on Friday 28th December at 10am from the Marquis Hall – which is in Castle Park opposite Dominos Pizza, Abbey St.

The ride is purely a social event for all members who can attend. Distance is approx 25miles at a leisure pace. Upon return to the hall at approx 11.30am the club will provide FREE mince pies, tea, coffee and bickies etc.

For catering purposes please advise by email or on Facebook if members intend to participate. That also means that Terry Nicoletti will have an idea of how many dishes he will need to wash post ride and whether a second pair of marigolds will be required.