North Down is committed to the development of young riders coming into the sport and joining the club. In order to provide an environment that is both safe and enjoyable for young riders the club organised a training course spread over two nights in June. It was fantastic that it was supported by 24 volunteers willing to demonstrate their support. This means that as well as having two dedicated Children’s Safeguarding Officers there is a large support structure of trained volunteers to help. Many thanks to all involved in this important part of the club.

It’s time again for the popular summer BBQ. As per recent years it will be held at the Pickie Bowling Club and club members will be able to reserve tickets by e-mailing the Club Chairman, Ian Blayney, or by contacting him on the club Facebook page.
As ever catering will be provided by Mark Brooks of Bow Bells in Donaghadee which will guarantee an excellent spread. Don’t forget that friends and family are welcome at this increasingly popular event.

Stephen Todd, the new Volunteer Group Co-ordinator on the Lagan Towpath is organising a ‘Lock to the Dock’ Fresh Air Miles cycle ride on Sunday 5th August – the weather is to be bright and sunny!!  The ride will demonstrate that cycling is a great way to tour Titanic Quarter and that it is possible to ride traffic free from Lisburn, along the scenic Lagan Towpath, to Titanic Quarter and Belfast City Centre. Anybody interested in joining the ride should contact  patricia.wallace@sustrans.org.uk The ride leaves the Lisburn Civic Centre at 11:00am.

It was the ‘ards 3 day at the weekend. Always a popular race with North Down riders with it being held on home territory and hosted by our neighbours in Newtownards. This year the club stuck to the traditional format with action starting on Friday night at Kirkistown Race Circuit. A formidable team of three was sent to represent the club. Shane Farren, Conor Hanna and Paul Ferguson answering the call to arms. Form has been excellent in the North Down camp with quite a few major scalps taken during the course of the season thus far so the racing team was ready for action……
Friday night kicked of with the usual short stage. This was dutifully won by Glenn Kinning who got away in the break. The break worked well together almost lapping the field. The North Down team chased hard though with Conor finishing just outside the top ten.
Unfortunately Paul didn’t manage to start day two meaning the team was down to just two riders. During the remaining stages it was Fraser Duncan (Eurocycles) who was doing the damage. Fraser is a well known local rider having started his riding career with North Down. He ended up battling it out with a very inform German rider  Christoph Schweizer (Team Nutrixxion) over the final two days with Fraser taking overall victory. Fraser made his time up during the Individual Time Trial and getting away in the breaks meant he went into the final Mountain Road stage with time in hand. Good defending by his team mates, including fellow Ras rider Adam Armstrong, meant victory was assured. With results like these Fraser is welcome to return to North Down any time he wants! Conor Hanna rode an excellent race also with his consistent finishes giving him the U23 prize as well as 10th overall. Looking at the results sheet it seems that he was the top A3 finisher also –clearly a man on his way to A2 before long! 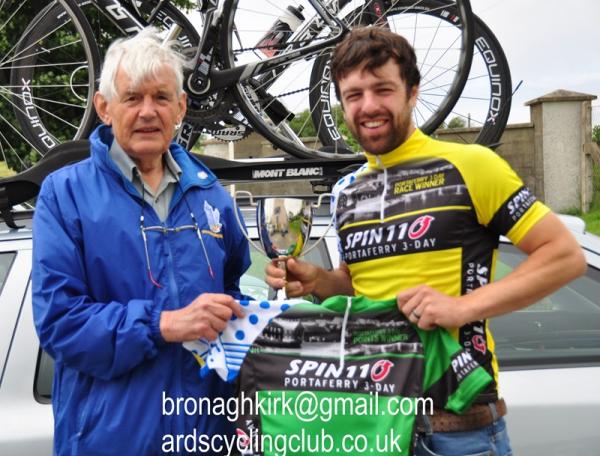 John Hunter has been busy riding again. This time at Cookstown with the distance being 10 miles. He came in just under 23 minutes in conditions that were far from ideal. David McCann dominated the event though. David, who is travelling to London to represent Ireland at the Olympics, used the event as his tune up before he does battle with the best testers in the world over the Olympic Course in London. Is it too late for Hunter to receive the call? Don’t stray too far from the phone, John!