I may not write too many of these this year…..we’ll see how it goes. Apologies first for any grammar/spelling errors – bit if a rush job.

I lined up for my first Master’s race yesterday. I turned 50 last Sunday and it felt like a bit of a ‘rite of passage’ for a bike racer to enter a Master’s race …or it is just finally admitting you are getting old.

Next week I’ll be back racing A3 … and to feel young again. 🙂

There was a good line-up and some good, strong riders at the John Haldane Memorial Masters Race – some I knew and some that were pointed out to me. We were also riding with the woman, so it was going to be an interesting race and lots of riders to look out for.

Coming into this race I knew I was going to be one of the stronger riders, but I wasn’t too sure how I was going to race it and what tactics to use. In my mind, I had three options – 1. Attacked from the gun – not one I was too keen on. 2. Wait until the second lap and then put in a few hard digs to see what happens – probably the best choice…. And finally 3. Wait until the final hill and go from there – I was never going to sit in until the end.

From the start, my hand was played as there were a number of attacks straight from the gun. Two riders got a gap on the brunch fairly quickly while everyone jostled for a position in the bunch. I waited a few seconds to see what the reaction was going to be to the two riders off the front. There wasn’t any, so I quickly chased them down and brought everyone back together. There were more ‘attacks’ on the way down to the Warrenpoint roundabout. They were more ‘surges’ than attacks ….maybe lasting a minute or so before the move died and then quickly wheeled back into the bunch. One of the girls had a dig off the front and I went with her. As I passed her to move in front I said to her ‘let’s give it a go’. Unfortunately, it didn’t last long either and the bunch was quickly on our wheels. There was a strong enough headwind and I think this was taking any enthusiasm out of any full-on solo attacks.

It did settle down after a while. A few of us pushed the pace off the front and the bunch followed behind. One of the Newry riders was working hard on the front, trying to split the group. I worked with him and when we turned to head back down the carriage with the wind now behind us, we really upped the pace. However, with the tailwind, it was easy for the bunch to stick close to us. It was strung out a bit, but nothing that was under any real pressure of breaking.

This was the pattern for the next lap as well. The same six or so riders pushing off the front at various times, but all brought back. I knew this race was going to be decided on the final hill. The Newry rider was still working hard at various times on the front. He was working a bit too hard as all his efforts were coming to nothing. I helped, but with the headwind and then the tailwind, it was difficult to split the brunch.

Paul Kirk came to the front during the second lap and had a few digs off the front. I let him go a couple of times to see the reaction and to see it someone was going to chase. Paul got no more than about a 20m gap before someone behind started to chase him. I just jumped on his wheel and quickly the bunch was back together.

On the last lap, the pace steadied a bit. I guess most realized that the hill was where the race was going to be decided. A few new faces appeared on the front, but not attacking – just riding on the front. I was riding down in about 5th-6th place just to get my heart rate back down into zone 2/3. On the final turn back down the carriage-way the pace did ‘naturally’ kick up again, but it was manageable. One of the other woman riders (in a green kit) appeared on the front and pulled it along for a few minutes before realizing (it seemed), ‘what the hell am I doing here’. Fair play to her.

She moved back and left me on the front again…. But I didn’t push it this time… I kept my own tempo and stay relaxed and in control. The Newry rider (sorry I don’t know his name) came to the front again and pushes it along one last time and then a few other riders came to the front and took turns. By now we were heading to the Newry roundabout and the final turn before the 1km section until the left turn off on the carriageway, which lead to the start of the climb up Greenan Road.

By now the bunch was together and starting to get jittery. Heading up to the turn-off, riders started to move up, trying to get the best positions. I moved up on the outside but didn’t want to be on the front when we turned again to hit the start of the 2km climb to the finish.

We turned and hit the hill. The first part was quite gradual and the pace was still relatively high. I was about 10 or so back and happy where I was. As the climb steepened, some riders started to go backward. I didn’t want to be on the front as I didn’t want to lead anyone up. We passed the 500m to finish mark. On the main steep section (16-18%), you could see it was starting to hurt many of the riders… I kept my own tempo but soon found myself on the front. The angle quickly levelled off as we hit the top section. I jumped back up to the big ring and pushed on to the finish, which was a slight drag up and around a slight bend on the narrow road.

John Rafferty (Ards CC) came up to me. I looked at him, smiled and said ‘come on John’. This finish was going to be a sprint. However, John wasn’t my only problem. The guy who came third (Fergal Magee), quickly came up between us and nearly squeeze me out between himself and the barrier at the roadside. I accelerated and did my best Peter Sagan impression and nipped pass him as we went shoulder to shoulder for a split second. I continued the sprint to the line and only beat John by about a wheel length.

So I got the win, but it was tough. Some A3 races felt easier. …..but looking back on it now, any 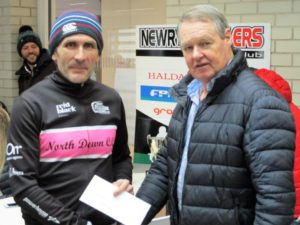 hilltop finish is going to feel tough. It was a good race and there are certainly some strong masters and a few strong ladies. I think any future Master’s race is not going to be easy… to win any of them will require some proper racing – but that will be a great advert for them.

However, riding up and down a carriage-way was not my cup of tea (though the hill at the end, certainly adds to this race now). It will be interesting to see how a Master’s race plays out on a rolling road circuit….. And that will be in the future.

Words by Paul McArthur
Image Courtesy of The Belgian Project