The sixth round of the Ulster Cyclo-cross series 2012 took place in Seacourt, Larne. This was the penultimate round of the Ulster Cyclo-cross 2012 series and the third time that the host club have used this site. It certainly felt like the start of December at the exposed site with a cool biting early morning wind but thankfully no rain. The course was in great condition after a few days of dry weather which pleased everyone. The memory of last year’s muddy race was still etched in the minds of those riders who braved the conditions last year.
As usual our juniors put in some fine performances. In the U14s boys it was the customary battle for podium places between Ben Webb and Will Hamilton. It now looks like “Bill and Ben” have sewn up the category between them. 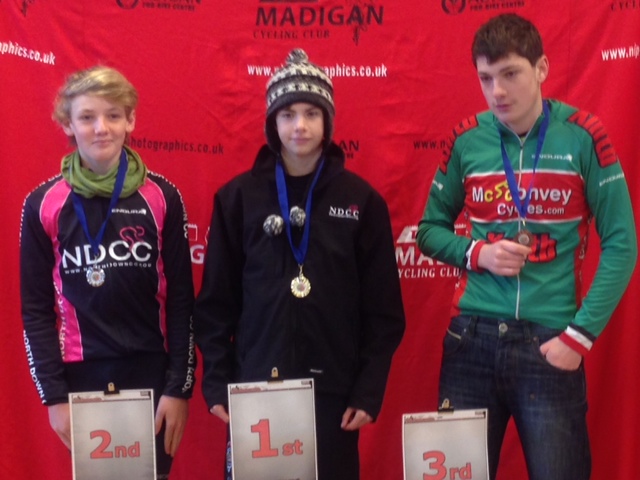 As ever Molly upheld the family’s ‘cross reputation with yet another win in her category. Molly must already have quite a trophy cabinet picking up trophies week in, week out!
The senior men’s race wasn’t without it’s drama. After a successful raid down South the previous weekend, Cross legend, Colm Mclarnon, looked like his long overdue win was finally coming his way. A blistering start from the gun combined with his incredible form meant that it looked like he would be leading from the gun to the chequered flag. Unfortunately like any other cycling discipline luck plays it’s part and today was not to be his day. A crash followed quickly by a puncture meant that Colm’s elusive first win would have to wait another week or two. This meant that it was up to Barry Hamilton to uphold club honours and he did this with some enthusiasm. A fine second place was his reward for the trip up to Larne. Close behind, Michael Hamilton put in his usual solid workmanlike performance finishing well up the pack rounding out another good day’s racing for the North Down riders. Garth Beattie brought up the rear despite a dominant display during Saturday’s training ride. 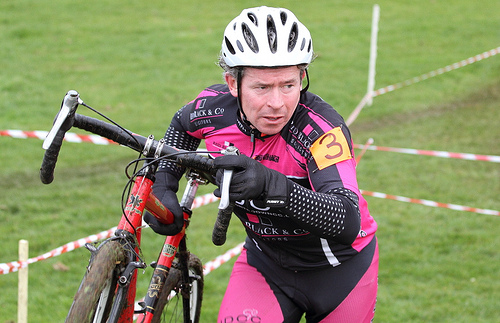 Most of our riders have now realised the benefits of a mudguard over the winter season both from a personal perspective and also from a plain courtesy point of view. What rider with any common decency would want to flick muddy water straight into the eye of a following rider?
It’s been noted however that there is still a small group of riders who perhaps are unaware of the misery they are inflicting upon everyone behind them. It seems that the main culprits are riding full carbon bikes with top end wheels and groupsets. Perhaps these unfortunate souls blew their entire budget before realising that the humble mudguard was a “must have”. To this end it has been proposed that we launch a Christmas mudguard appeal. Should you see an unfortunate rider, not just from our own club but also from the other North Down “B” teams, then feel free to approach them and ask how you can help them achieve their goal of a full set of mudguards.

It is a long tradition of NDCC to run two ‘Hot Port’ Rides in the run up to Christmas. This year the rides will be on Saturday 8th and Saturday 15th December.

This is a great pre-Christmas social event for the club and we hope many club members will take this opportunity to get off the peninsula(!!) onto some scenic country roads but within reach of all abilities.
Any North Down members who would like to take part should contact Ian Blayney to ensure that Daft Eddies are aware of numbers.