As many of you will be aware Matty Blayney recently announced his engagement to Angie Watterson. Both very popular members of the club with Angie recently taking up marshalling duties with Eric, Matty’s proud Father. Best wishes from all at the club for a long and happy lifetime together.

Well the road racing season seems like it has just finished though what a season it was! Trophies were collected by club members on the tarmac all season long but now is the time to dust of the cross bikes as the action moves onto the local parks and rugby pitches. This year the season kicks of at Lurgan Park with North Down sending a strong team as ever. Two of our ‘cross legends, Michael Hamilton and Ray Brownfield, having been running training days to help our new disciples to the discipline so expectations are sky high for the 2012 season. Fans of ‘cross may also remember that the 2011 season saw one Colm McLarnon threaten the top places on a number of occasions so the heavy burden of expectation rests on his shoulders.
Let the season begin! 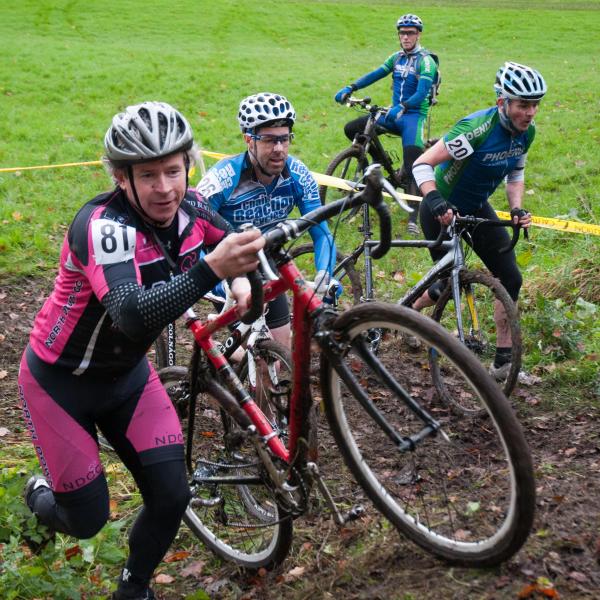 Since we have such a strong following and tradition of cyclocross in the club we decided to run an event of our own on local ground. Ballymacormick, at the Bangor Grammar rugby pitches, is to the venue and the date is to be Sunday 14th October. There will be racing for Under 12, 14, 16, a mountain bike support race and the main ‘cross race at 13:00. Full details can be found through links on the Cycling Ulster Website.
Cyclocross as well as being one of cycling’s most exciting disciplines is also a fantastically spectator friendly event with exciting, close up racing which is easily accessible. Some the city centre races last year were drawing huge crowds so let’s show some support to our local riders and marshals.

Dates for your Diary

There are a few important dates coming up over the next couple of weeks that you may want to take note of. The club AGM will be held on Wednesday 10th October at 19:30. As usual the venue will be the salubrious surroundings of the Club House at Ward Park. Don’t forget that it’s YOUR club so please make an effort to attend.
Then action moves to Pickie Bowling Club for the social event of the year. Prize night will be Saturday 17th November at 19:00. Please be aware that since the building is licensed all children must have left the building by 21:00. Please ensure that all perpetual trophies are returned to Eric cleaned and engraved in plenty of time.
Competition Secretary

The Committee would like to welcome Martin Piper to it’s ranks in the role of Competition Secretary. Martin brings a wealth of experience to the club having been previously Chairman of a cycling club in Saudi Arabia. He’s an experienced cyclist and we are certain that he will bring a lot to the job.
Let’s not forget our outgoing Competition Secretary though, Eric Blayney. Eric has totally owned the role keeping a steady hand on the helm whilst the club grew meteorically in size. He introduced the extremely popular Kirkistown race series, revised the time trial courses and was there week in week out ensuring our Wednesday nights were always well run. More recently he was arguably more famous for his glamorous team of marshals and we hope that they will provide Martin with the same support and devotion.