There have been rumours going round that the cycle season is over for 2013 but someone must have forgotten to tell North Down CC the news.

Janine McNally has been battling all week against some of the best female cyclists in the world over the hard roads of County Clare at the Ras na mBan. Long road stages, criteriums, crashes, atrocious weather and team time trials were all thrown at Janine and her Cycling Ulster Team. It was a steep learning curve at times but anyone who knows Janine will testify that she’ll back for the 2014 race faster, stronger and apparently lighter. Perhaps, with a bit of support from the club, with respect to masseur/soigneur provision then Janine will be able to mount a strong attack on the GC in this prestigious race next year.

At a slightly more sedate pace the Touring Team was yet again clocking up the miles. Saturday was the Marie Curie “Tour of South Down”. This event has traditionally been well supported by North Down and this year was no exception. Leaving the clubhouse on Saturday morning and picking up various nefarious characters along the way a large team of pink and black assembled at the Downpatrick Racecourse ready to support this worthy charity. The weather was kind and the course well marshalled resulting in a great days touring. Some of the team decided post lunch to take the short way home, picking up the ferry at Strangford and heading straight back to Bangor. With “The Ferries” left behind a much-depleted team pushed on round the course tackling hills at an enthusiastic pace, which moved Denise Hart to thank everyone at the front for their efforts. At the 85-mile mark, however, the team was beginning to show signs of fatigue but Rachy Sinnamon then moved to front and dragged everyone back home and more importantly through the psychological 100-mile marker. Altogether it was a great day out raising money for charity with great company and some fine late summer weather. 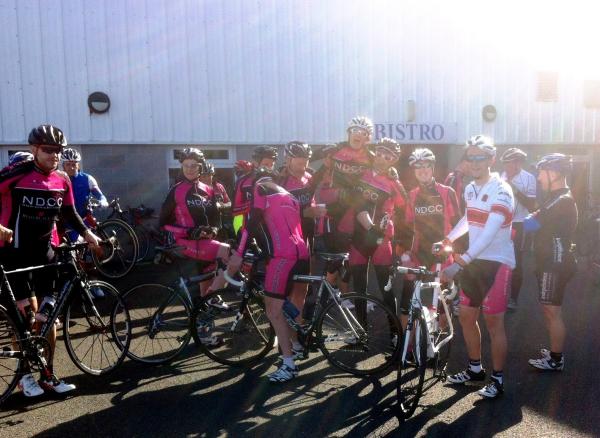 Whilst the weather gods were smiling on the club on Saturday, by Sunday they had lost a lot of their good humour. Ards CC had organised the “Tour of Strangford” and was met with high winds and heavy rain – a far cry from Saturday’s fabulous weather. On paper this event looked tailor made for NDCC. It awarded members the opportunity to cycle round the Peninsula on both Saturday AND Sunday. Surely the term “Living the Dream” was thought up with this scenario in mind.

Despite the weather we still sent a few hardy souls round the course ensuring the familiar club colours were in evidence on local roads supporting our sister club.

Unfortunately the same bad weather meant the cancellation of Sunday’s proposed 25 mile Time Trial. There is little point holding such an event in such windy conditions and the correct decision was made to cancel the event much to the relief of our fantastic team of marshals. It’s been a long season for them and they now deserve a long winter break from duties.

Next big touring event for the club will be the John Lindsay Memorial on Sunday. For some riders the season never ends……