Saturday was a wild and wet day for the riders in the Bobby Crilly Classic race promoted by Phoenix CC. The event, now famous for its Divis mountain top finish, had three races, the combined A1 and A2 race, the A3 race and the A4 race.

The A1 and A2 riders faced three laps of the 15-mile circuit that has several drags and a short steep climb near Muckamore. Then the race would turn up the road to Dundrod before beginning the seven mile climb to the top of Divis.The A4 race was also a scratch race with two circuits before the climb. As in the A3 race quite a few riders attacked the bunch but none of them were given much freedom and as the climb started they were all together.

The tough conditions suited some of our riders better than others and it was no surprise that Shane Farren came out best from the North Down Team. Shane, well known for shining on the tougher courses, finished 7th in the joint A1/A2 race against some of Ireland’s best riders. Coming up to the final steep climb up the mast though Shane had been holding onto 5th with North Down’s “Man of the Ras” Connor Hanna on his shoulder. Unfortunately Connor punctured within sight of the finish cruelly ending his race. Two hard charging A1 riders then made it up to Shane in the closing meters with our top finisher losing out to the A1s in the tussle for the line. A fantastic 7th place was his reward for a tough day in the saddle in terrible conditions. Further down the categories Keith Hooks continues to develop as a racer with a promising 8th in the A4 race. Overall there was a strong turnout from the team on a course well known for punishing the less fit made even harder by the dreadful conditions.

This weekend is to be the National Championships at Carlingford with North Down represented in both Male and Female categories. Janine McNally in particular will be hoping to improve upon her third place at last year’s Ulster Championships organised by Ballymoney C.C.

Everyone at North Down C.C. wishes our athletes the best of luck at this prestigious event.

There’s a New Mayor in Town 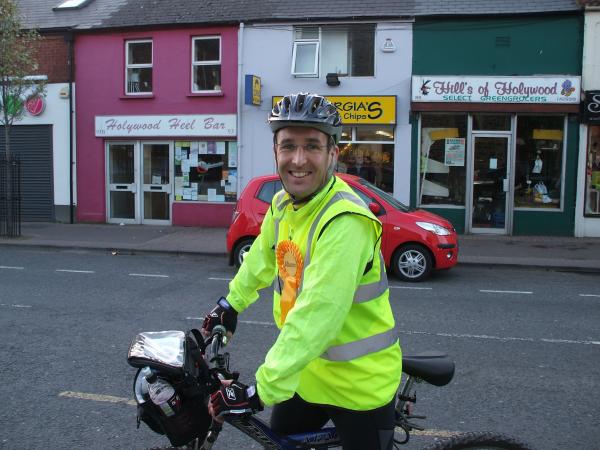 Whilst it’s a well-known fact that most politicians and councillors pay scant lip service to cycling using it as a band wagon to further their careers and their “green” credentials. (Witness numerous photos of uncomfortable looking politicians on bikes outside Stormont). At North Down however, we have the real deal. Andrew Muir, North Down Cycling Club member, has recently been elected to Mayor of North Down!

Speaking exclusively to North Down CC shortly after his appointment Mayor Muir had the following to say:

“I am delighted to have the opportunity to serve as Mayor and will seek to use ever opportunity available to promote and support cycling to repay the trust placed in me when I was awarded Honorary Membership of North Down Cycling Club last year. Bike Week has now commenced and I look forward to participating in various events over the week ahead. North Down’s cycling and running Mayor hopes to promote active living and sustainable transport with the same passion and vigour demonstrated since I became a Councillor in 2010. Theme for my year ahead is Working as One illustrating how I intend to build a Bicycle friendly Borough.”