Yet again the club racing series defied the rain putting on another 25 mile time trial on the Portaferry Road with 23 riders turning out for one of the more arduous events on the club calendar. Shortly before the event the rain stopped and the sun came out providing ideal conditions to hold the event. The plethora of PBs taken over the course of the evening plays testament to just how good the weather turned out to be.

The various categories were well supported though it was the blue riband event that was most hotly contested. Honour, equality and bragging rights at the Yacht Club were at stake as Ben Webb and Molly McLarnon fought it out over the full 25 mile course in the Under 14 category. Molly has been getting in good consistent results through the season but on the night the time checks along the course proved to be correct and it was Ben who took honours. Setting a time of 1hours and 16 mins on his first ever “25” coming in just ahead of Molly. If they can just stay away from sailing boats and stick with bikes the pair of them should be battling it out for overall honours before too long. 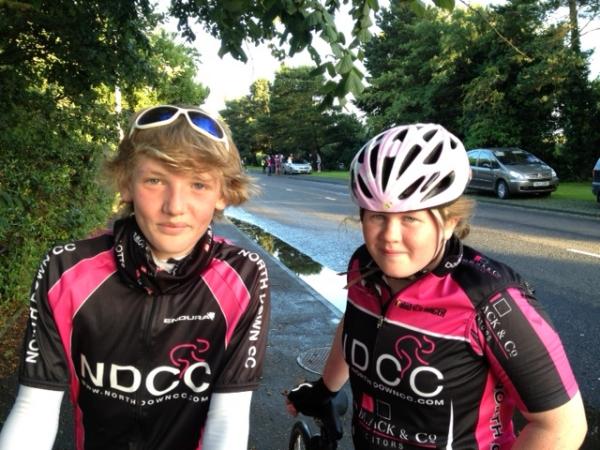 Of course the Webb vs McLarnon battle is nothing new and should resume again in October when the ‘cross season ramps up again.

In the ladies event Nicky Frew was fastest with Alison McMullan fulfilling second place duties. A position that she takes very seriously showing great consistency in her finishing position through the entire racing season.

Further down the subcategories there was a great tussle between Stephen Cousins and Johnny Cairns both showing off new machinery with Stephen coming out top. Apparently post race celebrations were courtesy of KFC! Has no one told Stephen that McDonalds is the official food of the Olympian?

Colin Massy put in a fine ride too with Garth Beattie showing open admiration for his choice of head wear both from an aesthetic and sartorial perspective. This plus the fact Colin took two minutes out of him would suggest Colin is more than pleased with his purchase of a “pointy helmet”.

Special mention to Peter Doggart. Good to see him back competing after his accident. Can’t keep a good man down……..

Next event will be the Carrowreagh Hillclimb on the 15th. Eric has been getting fantastic support from his volunteers over the season so let’s keep it up. Many thanks to all who have helped in one form or another to keep these fantastic events running smoothly.

Big Weekend for North Down

It was another busy weekend for North Down riders. The men and women of the touring division were active on both Saturday and Sunday with lots of riders Lapping the Lough and also the infamous Dromara Hilly. Anyone who has completed the “Hilly” before know that this is one of the hardest touring events on the calendar with a LOT of climbing, much of it steep. Fantastic effort by our hardy team!

It wasn’t just the touring team in action though. The racing men and women were representing the club at the Madigan Grand Prix. The Madigan is a notoriously hard race with plenty of climbing in the Kilroot area near Carrickfergus. The Seven Sisters and The Lizard and two climbs often talked about by racers in hushed tones.

The stories didn’t deter Janine Carson though. Choosing this event to debut as a race she finished a magnificent third place! An awesome result on one of Ireland’s hardest course. Who would bet against her winning the event next year?

It was our Over 50’s though who were bringing the trophies home though. Another strong team was sent to represent the club this time to devastating effect.

It was a clean sweep for NDCC men taking – 1st Noel Boyce, 2nd Keith Miller, 3rd Noel Munnis – KOH – Noel Boyce! The race itself was 36 miles over a challenging 2 x 18 mile lap circuit with 2 climbs each lap and a prime at the 2nd KOH on the first lap. 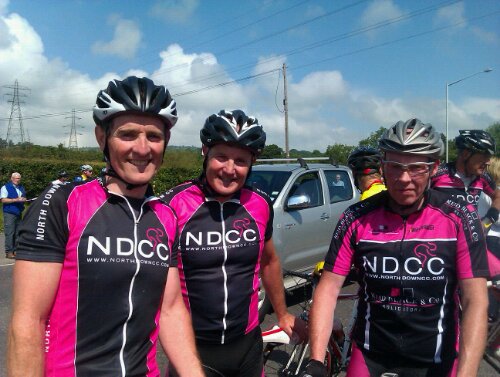 From the off, North Down riders were on the attack up the drag to the Blow Hole, each time forcing the other club riders to chase to close the gap. This attacking was brutal and constant, each time the gap was closed another NDCC rider would go off the front. With Noel Boyce, Noel Munnis, Keith Miller and John Hunter having 2 – 3 attacks each, it was clearly hurting the other riders. After about 6 miles into the race Noel Boyce launched another attack which this time stuck and turned out to be the winning move. However with some 30 miles to race and with a head/cross wind and the climbs ahead he had set himself a hard task to stay away. The other club riders eventually grouped together to form an organised chase but their efforts were in vain as he had opened a 1min 40 gap by the end of the first lap and went on to solo home by approx 4 mins. A fantastic margin to win by!

Once he had broken clear on the first lap the other NDCC riders obviously sat in for the remainder of the lap and then started to work again to secure 2nd and 3rd places on the podium. On the last climb, Noel Munnis and Keith attacked and opened a gap which they maintained to the finish line with Noel’s chain breaking unfortunately on the sprint to the line. First over 50s race for Keith which he enjoyed, with the attacking nature of the riding and the race tactics deployed.