Whilst the National Championships are the platform for Youth riders to shine as individuals, in Track racing the annual Youth Inter-Provincial championship is an opportunity for Youth Track riders to compete together as a team representing their Province in competition for this prestigious title, which since 2010 has also included the winning Province lifting the impressive Sean MacAoghain memorial trophy.

For 2014 Leinster and the Sun Drive track played host to the event, which saw a revised format, placing more emphasis on ‘team’ events, to include Team Sprint; Team Pursuit and a thrilling finale event, the ‘Team Spirit – Team Sprint’ where representatives from across the U12, U14 and U16 ranks compete together in a Team Sprint event to round off the proceedings.

As expected the event was a head-to-head shoot-out between Leinster and Ulster; with Ulster buoyed by their recent successes in taking the lion’s share of the titles in the recent National Youth Track Championships.

The Ulster team, managed and coached by North Down’s Anthony Mitchell and Banbridge CCs Nicola McKiverigan, had Gathered riders from Counties Donegal, Down, Tyrone, Antrim and Armagh, and signalled Ulster’s intentions early in the proceedings, taking the top 3 positions in the opening event; the Under 12 100 metre Time Trial.

Confirming that the future of Track Cycling in Ulster is bright – despite the lack of proper facilities – the Ulster Under-12s shone throughout the day, taking the maximum points possible in all their events, with the trio of Ciaran Dixon (Phoenix CC), Amanda Gallagher (Errigal CC) and Katie Armstrong (North Down CC) sharing the podium places throughout the 5-event programme.

Katie has made great progress on the Track this year, and in riding ‘down’ to the Under 12 category in the Inter-Pro finished runner up in both the Time Trial and Flying Lap event to help boost Ulster’s points tally. 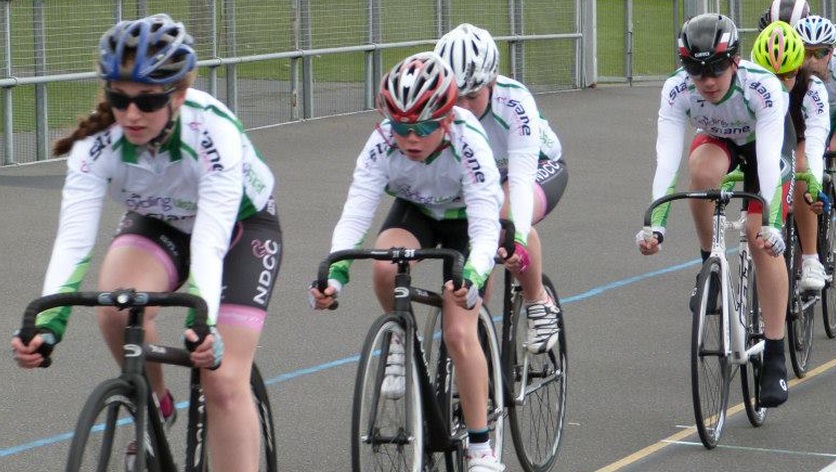 Ulster’s Under 14s were also on form, taking wins in the Time Trial and Scratch and Sprint events, with Leinster getting the upper hand in the Team Sprint event.

North Down’s other female Track specialist Molly McLarnon was an integral part of the Under 14 squad, again riding ‘down’ a category. Molly teamed up with Donegal’s Ciara Doogan to finish 3rd in the Team Sprint event, and also was a key player in our ‘Team Spirit – Team Sprint’ event to cement an Ulster victory.

The Under 16 squad saw the Ulster selection for next month’s Sainsbury’s UK School Games riders compete together as a team for the first time, with their 3km Team Pursuit ride of 3min 3 sec setting an unofficial National Youth Record, putting almost 25 seconds in to the Leinster quartet.
While Leinster`s one-man dynamo Adam Stenson dominated the individual events, Ulster riders still took the major share of the podium positions to head the points table.

The final event on the programme was a new innovation, given the title of Team Spirit – Team Sprint which saw each of the age categories compete together as a province over a Team Sprint format, starting with an Under-12 rider who completed a ½ lap, followed by two Under 14 riders each also covering ½ lap, and ending with 2 Under-16 riders covering one lap each. Always a popular event at local tracks, this event gets the supporters, parents and officials on their feet to give support and encouragement throughout the 3 ½ lap event.

With the two leading Provinces, Ulster and Leinster lined up there was provincial pride at stake, as Ulster already had the competition in the bag, but as the starter’s gun fired, both teams and the respective noisy supporters were both doing their bit to secure victory.

By half distance Ulster were well ahead, and with the final two riders on the track Ulster’s Conor McLaughlin had a 100+ metre advantage over Leinster’s secret weapon – Stenson, who was visibly at ease in the early stages of the event and able to give his team mates verbal support and abuse in equal measure!

Stenson reduced the deficit in the final 460metre lap, but was unable to salvage Provincial pride for the home side who were gracious in defeat to the Ulster visitors.

The 2014 Youth Inter Provincial event was a smooth and slick event, perhaps with the threat of rain keeping the proceedings running. All credit should go to Hugh Byrne and the Sun Drive crew who kept the racing moving throughout the day and which made for a super event.

With Youth cycling representing the future of our sport, the final points tally on the day of Ulster 83 and Leinster 41 was relatively unimportant, it is the discipline of Track Cycling and Youth competition which was the winner.

Other Cycling disciplines may enjoy greater numbers, but events like this on the Track are unique in that riders and parents can mix and socialise throughout the day, and riders also have the chance to relax and bond with fellow competitors from ‘rival’ Provinces in the ‘down’ time, whilst becoming the greatest of enemies when the flag drops!

Just think how much better this would be for the development of riders and the sport if it were to take place indoors…….