While our elite mountain bike division has already been in the thick of the action at McConvey’s Series in Ormeau Park this weekend has opened up the season for the road men. The traditional start to the Ulster racing season has always been the Annaclone GP hosted by Banbridge CC. After a good solid winter’s training the North Down team was raring to go putting in a strong team of motivated athletes. Almost from the start the team showed its intent with Richard McCullough and new boy to the club Connor Hanna getting into the break on lap 2. The boys were staying away too though disaster was to strike Richard. He went down in a crash and broke his frame fortunately though he was able to get up and walk away from the accident. Connor powered on however to take 5th place. A fine start to anyone’s season and an excellent debut from Connor for the pink and black. 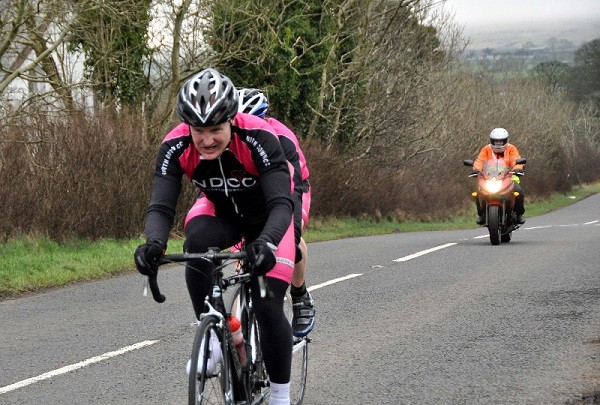 Sunday morning then saw the second road race of the season – The Phoenix GP held up at Nutt’s Corner. With races for all categories including the cream of the club – our over 60s this was always going to be a big day out for the club. Matty Blayney however took arguably the biggest scalp by winning the A3 race against some serious competition. Against a strong bunch of Phoenix riders determined to close down any breaks Matty tried to get away but they weren’t in any mood for letting riders go. Coming up to the last lap the bunch was compact which would play into the hands of the sprinters. Michael McMullan drove it hard at the front with Connor Hanna then taking on chief lead-out duties. With 300 metres to go Matty lit the blue touch paper. Riders tried to go with him though none could live with the savage pace he was setting. Matty Blayney winner of the Phoenix GP! Upon closer examination it turned out that he had won with a semi-deflated tyre as well! That should worry the competition a little as he reckoned he’d ridden the entire last lap with a semi. Picking up so many points this early in the season should see him racing with the big boys in the A2 category before long. He wasn’t the only North Down rider to lift silverware though as Noel Boyce won the over 50s with Noel Munnis making it a very classy North Down 1-2. Noel very kindly dedicated his emphatic win to Russell Moreland, popular North Down rider, who sadly passed away recently. Riders performed well through the other categories with Louise doing well in the ladies class and our A4 riders putting in strong performances. At the sharp end of the field Paul Ferguson was sole representative in the A1- A2 race. Paul stayed away in a two man break for much of the race though the bunch finally reeled them in with Paul  in the middle of a fragmented bunch amongst distinguished company.

With two wins, a second, a third and a fifth this weekend it has been an excellent start to the season for the club and with many more riders looking like they’ll be doing some damage once they get a few more racing miles in their legs 2012 should be an outstanding season for Reid Black & co North Down CC. Bring it on!

Best wishes to Paul Swenarton. Paul is the latest North Down rider to get knocked of his bicycle by a motorist and hopefully he’ll be back on his bike soon. Riders should note that drivers in the North Down area seem to have a very poor understanding of how to share the road with other users and only basic comprehension of the highway code. Please  ride safely and with this in mind.

The annual NDCC Quiz Night will be held this year on Saturday 31st March at 7.30pm in Pickie Bowling Club. This night is always a sell-out so members should ensure that they reserve their tickets early!!
This year the club has already secured over £200 worth of prizes for the quiz and ballot. As ever Mark Brooks of Bow Bells will provide a light supper. All this for only £5 per person!
Teams of no more than 6 people can take part but singles, couples and teams of under 6 are welcome to attend. Last year it was the young brains of the club who took victory – can they make it two years running?
This is a great opportunity for new members to the club to come along to one of our best social events. Remember friends and family are welcome too.